How is it that you know how to discern the face of the sky…But you cannot discern the signs of the times...Matthew 16:3

WOW, looks like many "Christians" have found their messiah...Let us all bow down and worship the man, the myth, the legend that is Obama... Let the deception begin...

I'm all for tolerance and responding with grace... right up to the point where someone asks me to drift away from my guiding principles all for the sake of monetary gain or some other proposed "good" to mankind. Without God's principals squarely in charge of man, there is no achievable "good" for man. Man's best is still God's worst.

God has unconditional love but he also has unchanging law & truth. His truth does not change to accommodate the times, economic comfort or some political candidate, especially one who would hide behind a Christian theme and then seek to strip away and destroy the very principles Christ came to deliver.

All of the soft talk and politically correct speak does not cover an agenda that moves toward pleasing man and forgetting God. Maybe some have found a way to turn their head and hold your nose to some of these policies, but I cannot. I have NO interest in being politically correct for ANYONE, and I will never choose Economic Comfort over the TRUTH of MY SAVIOR.

So, dear Christians if this is indeed where you would choose to plant your seed in November, I hope you can live with the crop of moral destruction you release on your children and our children.

Just remember this... and keep this message because this I will prophesy to you... If this man should win... prepare yourself for the beginning of the new ROME, full of the same lusts for the pleasure of man and the absence of God, and also the same destiny... but dont take my word... God's word in Daniel Chapter 2 predicted the destiny of those who will act as Romans...

Change is Coming for sure... just as God said they would... but not toward God, but away from Him and the Christian Church alone will be the catalyst for that change. Don't be decieved ... the world always justifies it actions by those we justify as a Christian People... What we accept... they will adopt... but remember, God said.... judgment will fall on HIS House first.

God does not and has never offered grace to a nation who rejects truth...
and I have never seen a more blatant disregard for God's truth than this man "Obama" presents. In his power, he would overturn every ounce of God's favor on this nation. God never seeks the lesser of two evils and never forsakes His truth for economic comfort or expedience.

Jeremiah 8:8-9
8 " 'How can you say, "We are wise,
for we have the law of the LORD,"
when actually the lying pen of the scribes
has handled it falsely?

9 The wise will be put to shame;
they will be dismayed and trapped.
Since they have rejected the word of the LORD,
what kind of wisdom do they have?

Hosea 4:6
6 my people are destroyed from lack of knowledge.
"Because you have rejected knowledge,
I also reject you as my priests;
because you have ignored the law of your God,
I also will ignore your children.

Jeremiah 2:13
13 "My people have committed two sins:
They have forsaken me,
the spring of living water,
and have dug their own cisterns,
broken cisterns that cannot hold water.

Pray and be careful what you approve... don't forsake your Godly Inheritance...For none of us will outlive the effects of the choice we make November 4th... 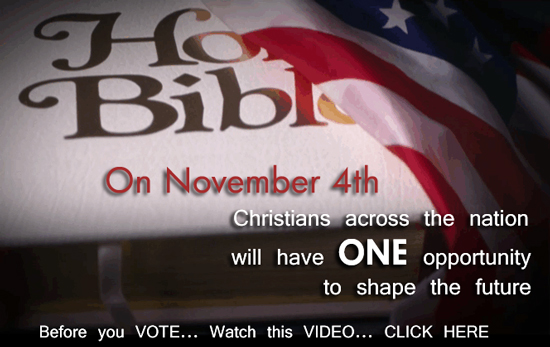 What Does God Care About?