No this is not about Mitt Romney even though there was a rumor out that his running mate, Paul Ryan, did refer to him by the nickname "The Stench." Ryan said it wasn't true, but what do we care? At least he's not in the White House and that is all that matters.

A very prolific man of God preached a sermon concerning what people say about making excuses for not going to church.

I must admit, I am one of the "church's" biggest critics, having been a woman who used to "beat the preacher to church on Sundays" since the early 1980s (saved in 1979).

Because of some nasty things that happened over the years, I quit going. Period. That's all I will say about that, it is too long of a story to discuss in a short blog.

However, I had an opportunity to listen to a real man of God preach about it these many years later, and it was highly evident that he was anointed to preach the gospel of God at such a time as I was ready to receive it.

Dr. Robert L DeFrance of Redeemer Baptist Church preached the only sermon I heard from him and the only one I needed to hear as I transitioned through another phase on this journey and though I wish I had recorded the entire sermon, it was about the Ark of Noah and how it must have smelled in there with Noah and his family and all of those animals locked up for 40 and 40 with nothing close to what we might call INDOOR PLUMBING.

In the end, the comparison was between the lockup in the Ark of God rocking on the waves above the rest of a destroyed world and the virtual "lock-down" that we experience in this life just living it and going about our daily business trying to wade through the trash and mess that others leave laying about outside and inside.

I will never forget that sermon. Ever.

His words drove me back into a regular church and he is the only one who ever said something that actually affected my attitude about it. Never were truer and more sincere words spoken from a man of God than these.

I bless with the words of my mouth the man of God for just speaking the truth in love.

It was meant for me, but he used his own life as an EXAMPLE of how to do it, and led instead of cajoled.

Thank you for that Dr. DeFrance. Indeed, you walk with the Lord in spirit and in truth.

(Rev Dr DeFrance of Redeemer Baptist, Los Angeles, is on the far right). 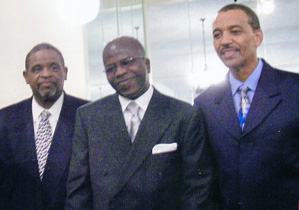