An organization calling for True Holiness..

”A CALL TO HOLINESS”

As Sons of God continue to arise in the earth today as 'the true' continues to separate from 'the
false.' Those who yearn for truth find it increasingly difficult to be in the presence of anything false,
as the level of tolerance for such decreases daily. Equally so, those steeped in religion and its
deception, or the spirit of anti-Christ, find themselves at odds with those who proclaim to live by
the leading of the Spirit (every word that proceeds from the mouth of God). Think it not a strange
thing that this is happening, but recognize the times in which we are now living. Recognize where
you fit (who you are spiritually joined to, and where you are physically called) during this critical
hour, 2010 is a year of positioning for what will happen beyond this calendar year, This is not a
time for hesitation if indeed you have heard God, To be out of position at the end of this year will
be costly.

God is in the process of establishing "a Church without spot or wrinkle." Many will be shocked
to find that this temple is not the physical, social, or denominational edifice now claiming to be the
Church, The true Church is made up of living stones, whose leading is the Spirit of God, whose
sole purpose is His Glory. The true Church will usher in the next great move of God; and this
move will be accurately called "The Kingdom of God." "The whole creation is groaning for the
manifestation of the Sons of God, as God's Kingdom is forcefully advancing, and violent men
(yielded vessels) are taking it by force."

The Kingdom of God is emerging in the earth, not as a descending Kingdom but as an ascending
one, as the Sons of God birth the Kingdom on earth by simply 'hearing and obeying.' Even now,
the Kingdom confronts the World's System with devastating effects. Every thing that can be
shaken is being shakened, as the fire of God separates the works of men from the works of God.

True Sons have come to realize that no man can have faith for what he has not heard the Father
say (to him specifically). True Sons know that faith can only come from having heard God
personally, who know that the logos confirms what God's Spirit speaks. True Sons are moving in
discernment, trusting the God (in them) and not themselves. True Sons are leaders who are not
deterred by men or circumstances, having advanced to a point in which their very lives have
become less important than Glorifying the God they serve. True Sons have made the great
exchange -their life for His.

True Sons do not fall for the tricks of the anti-Christ spirit so prevalent in the earth today; a spiritso deceptive that the very elect would be deceived were it possible. True Sons can see a false
prophet (and his bondage), while others buy into his lies, manipulation, and self-serving purposes.
True Sons recognize that those who have overcome have done so by the blood of the lamb and
the words of their testimony. True Sons recognize that one's testimony (his life) and his words
MUST ALIGN to effectively minister truth; that no man can take you where he has never been.
True recognize that Truth is not revelation until it is walked out in their own lives. True Sons do not
seek a name or to be recognized by attachment of some title or accolades, but find their peace in
the God in them and whatever lot in life He ascribe for them.

True Sons never strive, but know the meaning of entering into His rest. True Sons are not lazy butlive a disciplined life spiritually, and mentally. True Sons recognize that HOLINESS is internal not
external. True Sons exhibit the character of God and arrive at a maturity level of Sonship based
upon years of yeldedness. Ture Sons will not compromise God’s Truth.

As Sons are increased in the earth, the Kingdom of God will become evident as those in
obscurity are brought forth. Birthing Sons is the mantra of present day Kingdom walkers. The
Army of God is walking in His planned strategy for Victory as those He ‘CALLED’ Sons
begin to connect with those with whom the Father of Creation has joined them to. Think it
not a strange thing! Yield to the urges God has placed within you without fear of rejection,
history, personality, socio-economic issues, or any such thing, 2010 is a year of
positioning!!!!!!!!!!!!

ARE YOU FILLED WITH THE SPIRIT OF HOLINESS????

Priase the Lord!!!Saints of the Most High God,the Lord has layed upon my heart to ask the body of Believers in True Holiness (Are you Filled with the Spirit?);God wants to make us pillars:…Continue

You need to be a member of Holiness Ministry Coalition to add comments!

Men and Women of God:

I am writing to talk with you about an opportunity that is unique but serious enough that you need to take a look. There is a website that can change your ministry forever.  You might have lots of money but you do have a Word from God.  Now is the time for the world to receive it.  The vehicle that can get this Word out is a website called PREACHVILLE. (www.preachville.com)  Preachville is  and will be the premier minister's site in the next 12 months.  If you are a Bishop, Apostle, Pastor, Elder, Rev. or any other man or woman of God, you have a place on this site.  The cost to be on this site is the outstanding price of $10.  Yes, only $10 to have a permanent place on the internet.  Call 855-937-7247 and dial extension 1 or 4 and someone will help you.  You will need to record and edit the 30 minute broadcast before submission. It will also need to be in mp4 format so that it is an easy upload.

If you have assistant pastors or ministers that are young in the ministry, this would be a great opportunity for them to establish a place on the internet.  Remember, call 855-937-7247 for more information. 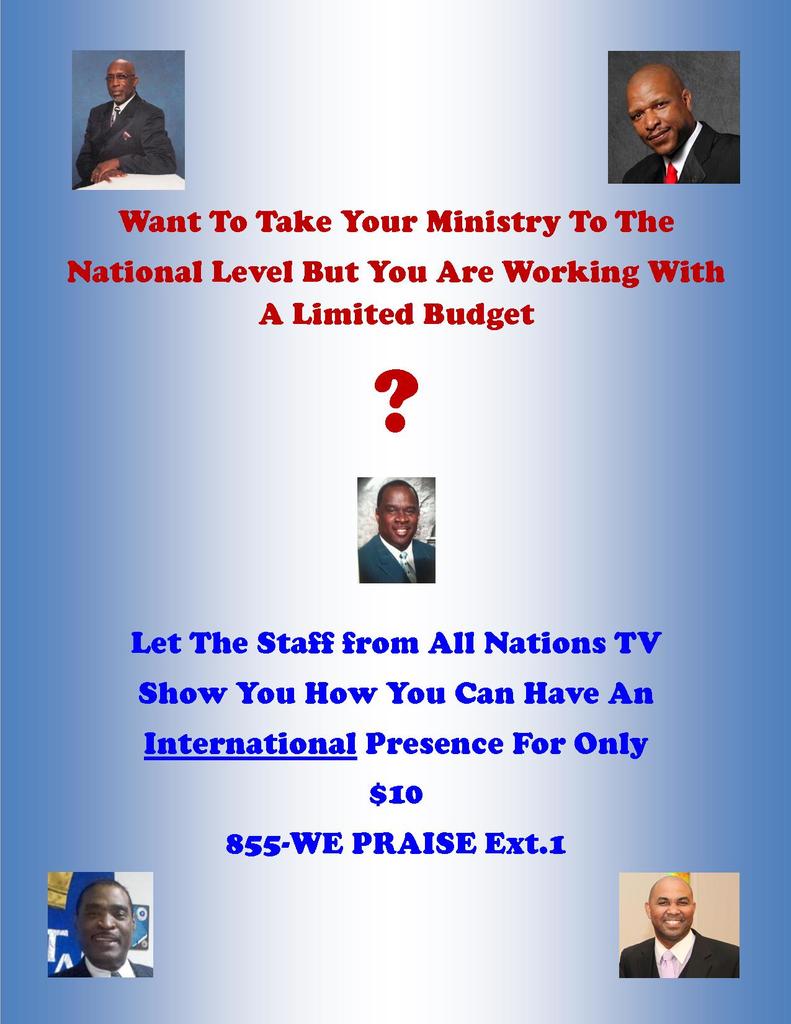 2013 has just begun and the Christian Community is a buzz!!.The Stellar Awards are coming but that is not what they are talking about.  They are asking one question.  WHO IS THAT ANT AND WHAT IS HE DOING???   The Ant is the logo of All Nations TV.  All Nations TV is a 24/7 Christian Internet Television Station that is spreading over the country like wildfire!!!!!  Have you checked it out yet??  Here is the website:  www.allnationstv.com

DO NOT MISS this NEW NETWORK that can be seen on smart phones, tablets, laptops and desk tops.  Better than that, it can be seen on the ROKU Channel.  Do you have a ROKU box??  You better get one!!  Now is the time to view it because it is growing at such a rapid pace.  Check it out and tell me what you think. 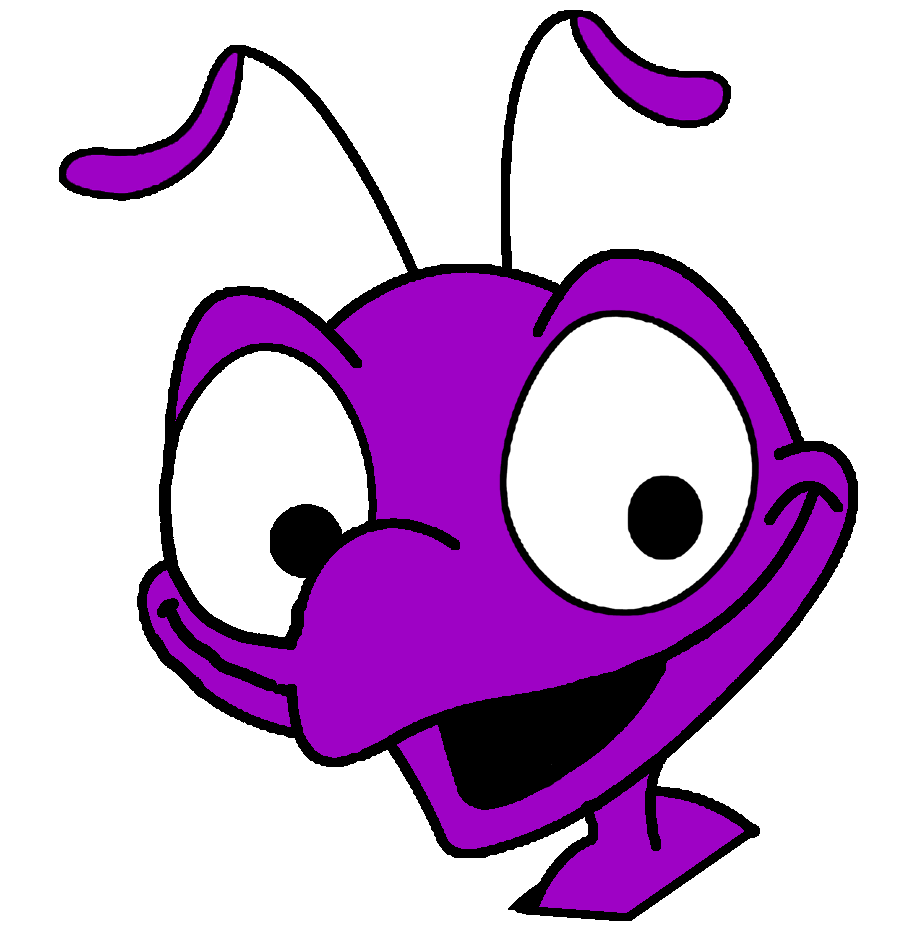 Was asked this evening can't you tithe in time, I answered yes, but who gets the remaining 90 percent. A 3 hour service on Sunday, a 90 minute bible study on Tuesday, a 45 minute Sunday School and maybe another 90 minutes with another ministry, you do the math. You spend more time away from the one you claim to serve.

Comment by Bishop Craig T. Campbell on September 26, 2010 at 9:25pm
Thanks to all who tune in every Sunday at 9pm est and Tuesdays at 8:30pm est. Broadcasts are live on;

Comment by Prophet Gary Becton on April 8, 2010 at 5:28am
God bless you Bishop, I stand with you as a man of God, God is spirit ,we must worship Him in spirit and truth. Poeple must come up, lay the flesh down and seek the spirit.