Breaking the Silence of Domestic Violence 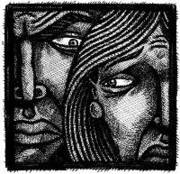 Homesell was born in Virginia in1900. She was a very tiny girl who married at the age of 14. It wasn't unusual to marry so young in those days. She and her husband moved from Virginia to a farm in Eastern Pennsylvania where they had thirteen children. Her husband farmed and Homesell worked for weeks at a time as a maid many miles from the farm, returning home one or two weekends a month. On those weekends that she so longed for to be with her children, she came home to experience brutal beatings by her husband. This went on for years.

In those days there was no help for battered women. The terms Domestic Violence and Battered Women didn't exist. Without a name there was no definition. Women were thought of as property. Living on a farm, the closest neighbor could be a half mile or more away. Who would hear your screams? Who would dare to get involved if they did hear? What could children do who were also under the tyranny of a brutal father?

As the children grew older they ran away from the farm. The boys joined the army and marines. A gutsy older daughter ran away but purposed to come back and get her mother.. Through secret letters and messages she passed through the children who remained at home, a bold plan was devised. When Homesell's husband made a regular trip into the nearby town, her oldest living daughter came to the property line with a borrowed car and took Homesell away.
With the help of the older children at home, it took a few nighttime trips and surprise appearances at the school to steal all the children away, but they did it. She was able to finish raising her children in Western Pennsylvania with the help of family and friends.

I grew up with Homesell's story; stories of the brutal beatings she and her children endured. Homesell's story is a vivid reality to me because she was my grandmother. Her seventh child is my mother. Homsell was a devout Christian so I'll see her one day. When I look into her eyes I want her to know that her pain was never forgotten and that her experience will give voice to others even nearly 50 years after her death.

Signs of an Unhealthy Relationship

Your relationship is NOT healthy if:You are frightened by your partner's temperYou are afraid to disagree with you partnerYou have to justify every place you go and everything you doYou partner puts…Continue

You need to be a member of Breaking the Silence of Domestic Violence to add comments!

Please listen to my audio-interview on Courage Network! It is very powerful! Thank you!

Bestselling Author "Know Your Worth" www.knowurworth.com

Comment by Vickie Evans on February 11, 2010 at 8:59pm
Dr. Lawrence,
This is a very powerful personal testimony! Your story reminds me of one of my fellow author friends, L.Y. Marlow, who wrote an incredible book entitled, "Color Me Butterfly", about her families 4 generation of domestic violence. You have to read it; your stories are very similar! Blessing to you, I hope we will stay in touch! Check out my website: www.forgiven2.com