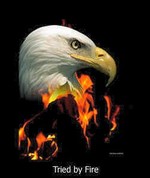 Those that are not afraid to said I've gone through and growed through some difficult times that the Enemy meant for Evil "But God" meant it for my Good. Stand up and be counted now we can help someone else.

Location: Calling All Nations-God Has No Respect Of Persons stand out and be counted!
Members: 27
Latest Activity: Aug 27, 2012

Greetings in the Name of Our Lord and Saviour Jesus Christ. I wanted to share with You how awesome God Is and the Things that he has done in my Life! We as the people of God often encounter attacks from the enemy and just when we think we are at the edge of life's cliff and we fell like we are hanging on by a thread and our strength is weak we began to release the string and just when were about to step Off, slide, fall and feels that it is over God through Jesus Christ steps in and pulls us back and gives us more to live for. At a very early age I Began to experience so much in my life not knowing who I was and what my purpose was I tried to follow the wrong crowd as Our Parents would say, but the things that they did I could not do or what they got away with seems like I would always get caught. Because I was in a state of confusion to me it was alright and okay to be popular and to fit in. ( I Beg To Differ) I drank, smoked, clubbed etc just to name a few of the things all because I felt like no one understood me I was always the victim (raped, molested, beaten but yet still alive)
I began to lose myself and the only thing that kept me sound was hearing my mothers prayer for us all. At the tender age of around 9 years old I would see things that was out of the ordinary and things that others around me could not understand as I grew up I began to seek other avenues just to take my mind or occupy myself with other things so that I could not see and hear the things that was going on around me. I can even remember going to a physchiatrist (because mentally my family thought that I was losing It) Ended up being in a tragic car accident that almost and did I say almost took my life 19 yrs of Age. "(But God)" Delivered me and saved me from the hands of the enemy. I can also remember having suicidal thoughts and thinking my life would be better if I were not born.
Well to make a long story short grew up or so I thought Got married ended up in a very abusive relaionship- I was mentally torn (But God) I can remember hearing God call me by my name at first I could not unerstand but now I do. I can remember him saying to me Blessed is the man that walketh not in the counsel of the Ungodly, I can also rember him saying whom I foreknew I also predestined. My response from that moment on was I hear U, I don't see U, But I can feel U, and that's all it took for me to believe! This is just a brief of what God has brought me Out of as he began to teach and train me allowing me to know his Character (My sheep knows my voice and a stranger he shall not follow) Even though life treated me like a Goat I knew I was a Sheep and My Father had other plans for me (For I know the plans I have for You) Just a briefing since I accepted his will, ways, promises my life has taken a total turn around so my heart's desire is to encourage others as God keeps me encouraged. Even though we Go through even after accepting believing and receiving many of the afflictions of the righteous not because of my goodness but because of his grace God will deliver him out of them all. Since then there has been many miracles that he has and is working through me by him. Without him (Elohim) I have no life! I yield myself to whatever he wants (Surrendering All) Saying Yes without compromise (to encourage you that even though the wind blowns we can ride out the storm, he will shelter us guide us lead and direct us for his purpose. I Hope u will allow him to be first in your lives (so he can order your steps) as he orders mine daily! So that you can help someone else through your prayers, support, testimonies, etc however he leads.
Be Blessed
Prophetess Rebecca Hickson
"The Truth" Prophetic Worship Center
Senior Pastor/Founder of Much Love Productions & Celebrity's Closet

What Do We Mean By Intercessory Prayer?

How Is Prayer A Form Of Worship? (What's Your View)

You need to be a member of TRIED BY THE FIRE (I Shall Comeforth As Pure Gold) I Made It to add comments!

Comment by Apostle Randy E. on August 16, 2009 at 9:27pm
It is so important to remember, children are the heritage of the LORD. Always pour into every child all you have to give and the LORD will do the same for YOU.

Your servant in Christ Yeshua

Hello My Friend. I pray You and Yours have a Safe 4th of July...
Your servant in Christ Yeshua