Evangelist Deniece Sargent has not received any gifts yet

Deniece Sargent, in November 1976 she accepted Jesus Christ as her Personal Savior. She began her work of service for the Lord begun by becoming Sunday School teacher to the Youth Senior class, working with the Youth Department and in any other capacity assigned unto her.

In 1982 she relocated and joined a ministry under the leadership of Elder E. R. Thompson. It was under his leadership that she continued to receive spiritual training by regularly attending Bible Study and Pastoral Teaching, which would help prepare her for the calling God had placed upon her life. She served as Secretary to the pastor, church clerk, Youth Leader, Assistant Superintendent of the Sunday School and teacher of the Youth Senior class and Adult class, President of the Women’s Department, President and Secretary of the Young Women’s Christian Council (YWCC). In 1987 she accepted the call to the ministry.

She is a graduate of the Mount Olive Bible College. She also graduated from the Church of God in Christ Academy in 1997 as Salutatorian and with High Honors. With the recommendation by Pastor Thompson she received her Evangelist Missionary license from COGIC National Headquarters.

After the death of Pastor Thompson in 1999 the Lord sent Elder J. Windley to serve as pastor of Harris Chapel COGIC. She served as Executive Secretary to Pastor Windley, President of the Missionary Board, the Pastor’s Aide Committee, Prayer and Bible Band teacher, Sunday School teacher of the Adult class, and assisted Pastor Windley on the weekly television ministry answering the telephone prayer line as well as on occasion ministering the Word of God in the absence of Elder Windley. She has also served in other capacities and held other positions within the minsity.

In September 2002 she won the Jurisdictional Women’s Department Queen coronation representing her local church as well as her District.

She serves faithfully her at her local ministry and is one that believes in supporting her pastor and the ministry.

In the community she has served as President of the PTA, Advisory Council secretary, volunteered as Assistant Director and Board member of an after school program entitled D-CAF/H.E.L.P.

She has been employed with the Board of Education for 16 years in the position as a Data Manger.

She is the mother of three daughters; two granddaughters, and a grandson.

Evangelist Sargent would like to see more ministering in the area geared towards meeting the needs of women. We have many women within our ministries that have internal hurts and pains stemming from abuse (mentally and physically, molestation, dealing with being alone and coping with children. Women that are within our churches are experiencing some of these areas in their individual lives and do not know where to go for help without feeling as if their confidence will be betrayed. We are here to minister both naturally and spiritually to the whole man or woman.

As part of the ministry God has given me He has and is still equipping me to minister in some of these areas to be a spiritual up-lifter into the lives of these women.

Evangelist Laura L Gates said…
Deniece God Bless You In Your Ministry! God have anointed and ordered your steps in the Oil of Joy Ministry! 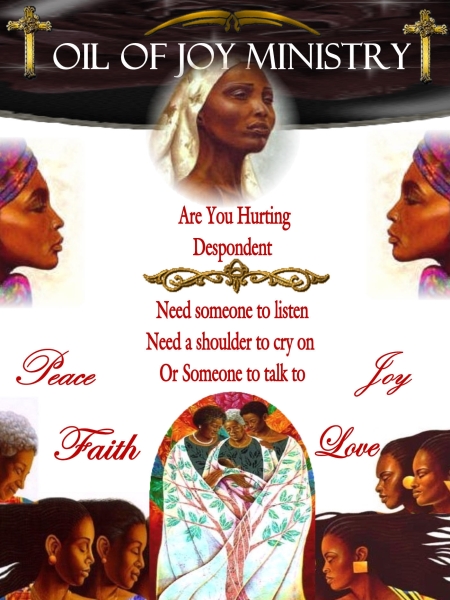