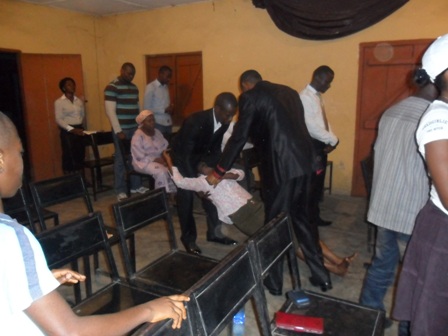 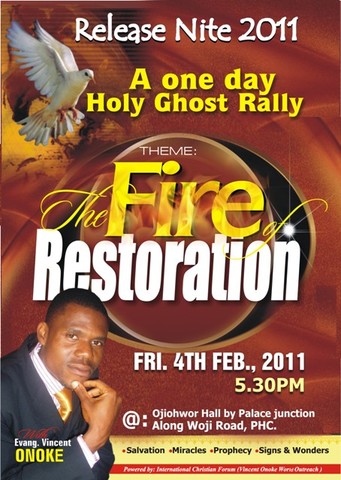 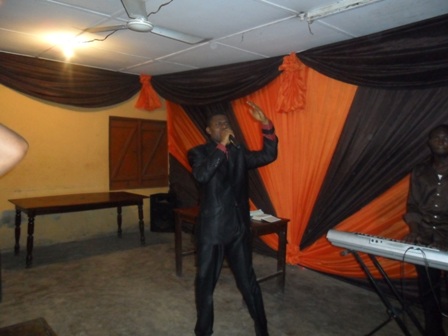 For the past few weeks the Lord has laid it strongly on my heart to do more revival meetings in churches. If you would like to have us come do a revival meeting in your church or location send us an e-mail to international_cf@yahoo.co.uk, we'll pray about it and send you a reply. Normally my ministry finances the program including publicity and other logistics. The program lasts for at least two days and highlights of our meetings include sound preaching, miracles…

Potiphar saw the Lord was with Joseph. When His Presence is with you, you don't need to announce it; it will announce you. TITLE does not bring ENTITLEMENT, MANTLE does.

HAPPY NEW MONTH TO EVERYONE! I SENSE STRONGLY THAT 31ST AUGUST WAS THE LAST DAY OF PAIN FOR SOMEONE. WATCH OUT CAUSE I SENSE SPIRITUALLY THAT SIGNIFICANT CHANGES AND POSITIVE SHIFTINGS ARE COMING OUR WAY THIS SEASON, ITS THE DAWNING OF A NEW DAY. HAPPY NEW YEAR!

I WILL BE HAVING SOME PROPHETIC/MIRACLE MEETINGS IN WARRI, BENIN CITY AND OWERRI (ALL IN NIGERIA) THIS MONTH AND NEXT MONTH.IF YOU ARE IN THESE AREAS LET ME KNOW SO WE CAN CONNECT AND NETWORK.

WELCOME TO JULY AND THE SECOND HALF OF THE YEAR

I WELCOME EVERYONE TO
THE MONTH OF SUPPLY-JULY. THE LORD BROUGHT ME TO OBADIAH 1:17 AS WE
ENTERED INTO THIS MONTH. THERE SHALL BE A FULFILLMENT OF OBADIAH'S
PROPHECY FOR MOUNT ZION THIS MONTH. TOTAL RESTORATION I HEAR THE LORD
SAY IN THIS SEASON. STAY CONNECTED!

I HAVE ADDED ONE MORE YEAR

On June 26th, I became a year older. As I reflected and meditated at home, I could not stop giving God thanks for all He's done for me. The Lord
told me He has stepped me higher in the anointing and i look forward to
greater exploits. Please say a word of thanks to the Father for me!

Happy New Year to you and Welcome to 2010. What a year it is going to be. If 2009 was a year of delivery as it was with many, then 2010 is for the NAMING CEREMONY o f those delivered miracle because that is what follows after every child birth. In Genesis 2:19-20, God brought the animal to Adam to name them, and whatever he gave them became their identity. This year God has put the power and authority in your tongue to SAY IT AND SEE IT. Whatever you say, you will see. Whatever you call that… Continue