My Testimony, Share yours! Lets be a blessing. PART 1

As stated in an earlier post, I wanted to share my testimony. I feel it's important to let people know what you have been through. It allows them a chance to see that you know what you're talking about ! LOL

Born into a family cursed (formally, curse broken) with addictions on both sides. On my mother's side, 14 uncles and aunties all addicted to some form of illegal narcotic. On my father's side, all men we're addicted to Drugs, drinking and women.

Born into poverty. At one point only living on $300 cash a month and $500 in food stamps (and not the lil' cards they have now! LOL Ol' school printed paper food stamps!) We lived in shelters, and on the street. For up to two years of my life we litterally lived in a tent, or under a bridge, in parks, etc.

I've had a gun pulled on me twice (No weapon..), been robbed about 6 or 7 times. And more recently I've had to make the hard decision to leave my church.

There's many details I could get into, but I'll stop there. There's no doubt to me that the devil had had his hand in many of those situations. I'll be honest and say that at some point I've blamed him for the cause and carrying out of many of those situations. But at some point I realized that he had to get permission. He is not to touch God's anointed, he needs permission.

I guess the next question then becomes, why did God allow these things to happen? Oh yes there was a point I asked that question, and actually became angry with God (ever done that before?)

I swear one day it was like I had an ephiphany. I realized that the things I had been going through, God was REALLY using them to make me stronger! See we have a lot of Cliches in church, and you hear all the time that your tests' become testimony and he will allow these things to make you stronger. This became truth to me.

God really did make me stronger. Stronger than I've ever been. The mess I went through gave me my power, gave me my joy, gave me my blessings.

I wouldn't be the man, or the minister I am if it were not for the things I went and still do go through

Permalink Reply by Minister Elvis Madison on January 17, 2008 at 10:09pm
This is a powerful testimony. Sometimes when I hear other saint's testimonies I get mad because I don't have a powerful testimony like theirs to tell others. I don't stay mad long becuase I realize that anyway it goes it's a blessing. Since I'm only 19( will be 20 next week), I realzoe that there is more to come. All I can ask of anyone is to keep me in their prayers, especially since I'm in college!!! Anyways, I praise God for you and thank God he saw you safely through your tests!!!

Permalink Reply by D.Brandon Campbell on January 26, 2008 at 7:13pm
Man, let me tell you, don't ever feel bad for "not having a testimony". Your life is your testimony! Sometimes we get caught up wanting to have a sob story for people to listen, but my brother, not going through these type of things, is a blessing and a testimony! You stay blessed! And Happy Birthday!

We are truly overcomers by our testimony!!!!! I believe that your testimony will be a blessing to someone. I too grew up in a tough environment. Mother on welfare (paper food stamps too. LOL!!!), an abusive step-father and a non supportive mother who chose a man over her own children. There were many times when my sister and I both contemplated suicide. I remember standing at the sink one night, I was in the 11th grade. My mother was in one of her moods and I was so frustrated. My sister was out of the house and I was still stuck in what really felt like hell at times. I remember picking up a knife and running the blade back and forth along my left wrist and saying to myself "I would be better off dead and She would not even miss me." But I heard a voice so sweet and low!!!!!!!! JESUS!!!! The voice said to me " Not SO!!!!! Glory!!!! Here I am 29 years old Saved, Sanctified, and filled with the Precious Holy Ghost and so is my sister!!!!! God has gifted her with Beautiful Feet as a praise dancer and right beside her is her daughter. So my dear Brother Brandon, I say to you "To GOD Be The Glory!!! Keep telling your testimony because somebody has got to know that there is nothing GOD can't bring you out of, and there is not a situation that GOD can't change!!!!! Keep Trusting in the Lord and he will guide you. The bible says "The steps of a good man are order by the Lord." Be Blessed!!!
Ayana

Permalink Reply by D.Brandon Campbell on January 26, 2008 at 7:11pm
Ayana you know I love you right? (I never told you, but my sister's name is Ayana. So you KNOW I Love you! LOL) Wow what a powerful testimony! It's a shame, but so many of our youth go through this type of thing evry single day! Here we are in chruch worried about silly things, and people's lives are at stake. I'm so glad you didn't committ that suicide attempt. You stay blessed! 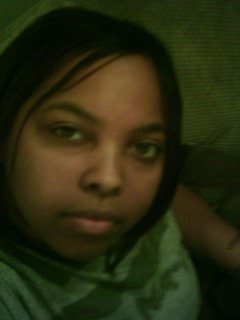 MY MY MY JESUSSSSSSSSSSSSSSSSSS HALLELUJAH. LOOK BACK OVER YOUR LIFE AND SEE HOW FAR GOD HAS TRULY BROUGHT YOU FROM WOOOOOOOO JESUSSSSSSSSS MY MY MY THANK YOU LORD GLORY HALLELUJAH. I CAME FROM A HOUSE WITH NO RUNNING WATER TIMES WERE ROUGH WHERE WE DIDN'T HAVE FOOD. I CAN LOOK BACK AND JUST THINK WOW I AM BLESSED... JUST LIKE I CAN SAY WOW LORD I THANK YOU THAT YOU BLESSED MY BROTHER AND PULLED HIM THROUGH ALL OF WHAT HE BEEN THROUGH GLORY TO GOD. FOR GOD GETS ALL THE GLORY AMEN. I TELL YOU ONE THING FOR SURE PEOPLE BETTER LOOK AT WHAT OTHERS HAVE BEEN THROUGH AND REALIZE THEY ARE BLESSED... GOD IS JUST SO AWESOME TO EVEN PULL SOMEONE OUT OF WHAT YOU BEEN THROUGH AMEN. JUST GET READY BECAUSE YOU DIDN'T GO THROUGH ALL THAT FOR NOTHING. I PRAY THAT YOU PROSPER EVEN AS YOUR SOUL PROSPERS IN JESUS NAME AMEN AMEN AMEN
PROPHETESS TERESA

Permalink Reply by D.Brandon Campbell on January 26, 2008 at 7:07pm
Bless you Teresa. Yea I been there with no water too. You're so right when you say God didn't take me through this for nothing, you're so right. I know that all tests become testimonies. Bless you Phropetess

Permalink Reply by D.Brandon Campbell on January 26, 2008 at 7:04pm
Wow what powerful testiments. It's amazing how God works (even in a bar!) For some reason I could not get back into this post! After all this time, today was the first day I could get back into this post. I'm so glad I did. I'll share more of my testimony in part two real soon, but I'd sure like to hear some more testimonies! THANK YOU JESUS!!!!