Is The Nation of Islam A Christian Organization

Many churches with Black pators are opening their doors to Lewis Farrakahn who claims that he is a christian, and muslim.
What are your thoughts on this and also some of the teachings of the NOI that are not in line with scripture.

Have many pastors become so black centric that they have left the true foundation that Jesus IS THe ONLY WAY .

A packed house welcomed Minister Louis Farrakhan to St. Sabina Catholic Church on Friday night with a standing ovation and cheers for his health.

The 74-year-old provocative Nation of Islam leader, who has endured a series of health setbacks, didn’t speak from the Quran but from the Bible.

“A good Muslim is a Christian, and a good Christian is a Muslim,” he added later, stressing the common aspects of the faiths. “Whenever Christ’s name is mentioned, I feel at home.”

Permalink Reply by Lester Demings Jr on March 15, 2010 at 4:18pm
No need to apologize you'll end up doing it again lol forgiving people is what I do.
I don't have a problem with anyone that disagrees with me but if you disagree with me and try and get negatively personal with their disagreement- THAT is what I have an issue with.
I don't have a weak heart so I can take disagreement but I will not have someone trying to get personal and attack me to make a point. There are many people I have disagreed with on this site but they yet have respect for me and I respect them to the fullest. If people would look at my message and not concern themselves with the messenger there would be no misunderstandings.
Now, how about we get back to the topic and get off me?!
I love the attention but Jesus should be our focus not me- I couldn't bear the burden that Jesus has to.

Permalink Reply by Coe Terrence Bass Sr. on March 15, 2010 at 5:33pm
alright les..................good
no one attacked you personally, or tried to make a point by attacking you.
maybe you should read your post on this topic and see if what your getting is in response to what you have put out.

Permalink Reply by markwinfield1 on March 21, 2010 at 5:17pm
Farrakhan actually claimed.To be a Christian?

Permalink Reply by BruthaPharoah on March 22, 2010 at 6:15pm
the 5th sura/Al-Maeda(42) But why do they come to thee for decision when they have (their own) Torah before them?― Therein is the (plain) Command of Allah; yet even after that, they would turn away. For they are not (really) people of Faith.

further........
(43) It was We who revealed the Torah (to Moses); therein was guidance and light. By its standard have been judged the Jews, by the Prophet who bowed (as in Islam) to Allah's will, by the Rabbis and the Doctors of Law: for to them was entrusted the protection of Allah's Book, and they were witnesses thereto: therefore fear not men, but fear Me, and sell not My Signs for a miserable price. If any do fail to judge by (the light of) what Allah hath revealed, they are (no better than) Unbelievers.

in the jew was entrusted the "Most Highs" Book

the world would have you believe there is a separation, there isn't 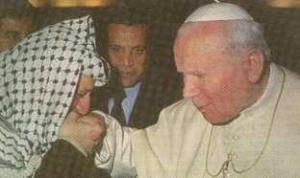 they will all bow to the abomination of dsolation

if the quran says (not islam) that the plain command of god is in the torah, then it is right

i posted this sura, just read it slower this time

further .......
i do not follow islam or the practice thereof .
my point being as christian teachings does not match the bible it is taught from
so be it with the teachers of the quran,islamic teaching doe not match the writing of the quran
as for the misinterptation of the scripture he is not the israelite he cannot discern scripture, without the israelite, so he could not discern who Yahshua(Jesus) was ,the same with the rest of the world ,love 'em as the lamb, but know not he is going to return as a loin
mumammad understood that the book was entrusted to the jews "truth" ,he knew Moshe(moses) brung the law & yahshua ,brung the gospel(goodnews) of the kingdom"truth" ( in which muhummad clearly held superior, than his writing)
shoot~ if you think about it he knew more than your average christian
whether you know it or not the lord got business to do on this earth ,and has told us that he will strike thru kjngs Making it more than obvious that he maketh kings to reign (we need our people to get there head out of the clouds and down on the thing coming upon earth ) do you see the war brewing between the the jewish & the muslim world, how much of this which we see will pay a part in all nation gathering to battle in the middle east? or how big apart do you think the MostHigh is playing in all this?

9But he that denieth me before men shall be denied before the angels of God.

16And other sheep I have, which are not of this fold: them also I must bring, and they shall hear my voice; and there shall be one fold, and one shepherd.

9.Romans 13:10
Love worketh no ill to his neighbour: therefore love is the fulfilling of the law.

10.Galatians 5:14
For all the law is fulfilled in one word, even in this; Thou shalt love thy neighbour as thyself.