The Sabbath is one of the most talk about controversial topics, however the 7th day according to scripture is the Sabbath, as many are compelled to instruct many theory’s, claims or doctrines on how the Sabbath should be observed.

In Judaism according to Judaic law, Saturday is the 7th day Sabbath. Which on a large scale the 7th day Adventist and many Hebrew Israelites would agree.

It is knowned historical fact, that the origin of Saturday was named after a Roman god called “Dies Saturni”

It is also a scriptural fact that the Biblical Israelites observed a Hebrew Lunar calendar, which they have used to calculated the Sabbaths and holy feast days. New Moon in the Hebrew lunar calendar is the beginning of the month.

The calendar that we use in modern society today (Roman Christian calendar) is no where mentioned in scripture, nor was it ever used by the Biblical Israelites. Upon comparing the Hebrew Lunar biblical calendar vs the Roman Christian calendar (Gregorian), It is evident that the weekly cycle upon both calendars (Hebrew & Roman) are not identical.

The Julian/Gregorian which is a calendar that is inspired by Satan does not constitute the New moon as the beginning of the month, as being that this was done on purpose.

The Sabbath law was given a few months after the Exodus period, during that particular time the Roman Christians calendars did not exist, neither did the word Saturday or Dies Saturni. So upon knowing this fact, you would ask yourself. What calendar should the 7th day Sabbath should be calculated upon ? Should I calculate the 7th day Sabbath upon the Biblical Hebrew lunar calendar or the Roman Christian calendar that was inspired by Satan.

In this website, www.lunarsabbath.co.nr
it will explain in full detail on the origins of Saturday and the Biblical Lunar Hebraic calendar.

I'm excited to find other black lunar sabbath keepers.  Why does it take our people decades to get a spiritual concept.  I realize that all understanding must come through a revelation, but you have 'so called' Torah observant congregations who keep the feast days according to the lunar cycle and then turn around and keep the Gregorian weekly sabbath.  And they will fight you on the issue defending their belief in the satanic system.  I kept the Gregorian sabbath for 3 years.  It made me so uneasy.  Something wasn't right. Even my children (16 and 9) could see a problem. So I asked Abba YHUH to reveal truth to me. After a year of seeking an understanding I found scriptural proof that our ancestors used the lunar (hodesh cycle) to worship Abba YHUH.  I use a calculation that I found on another web-site, but since I'm learning and open for options (as long as it can be proven by scripture) I'll check out the link you posted. Thank you for this blog and be encouraged and faithful until the end.

Permalink Reply by Michael PORTER on September 7, 2011 at 1:13am
Don't really understand what you meant. Which day should we gather for Sabbath worship?

The scripture in the Book of Moses (Torah) clearly says the 7th day is the sabbath.....What needs to be evaluated is which calendar is the 7th day in reference to?

Is it according to biblical calendar or the Calendar created by the Roman Empire ?   If you do research your will notice that only calendar was ever in use and was only acknowledge is a calendar governed by the New moon.  This Gregorian calendar does not constitute New moon as the beginning of the month, nor is their any scripture or any historical evidence to support that the Israelites ever used or acknowledge any calendar created by a wicked gentile nation.

In this blog which contains a website does bring more light in regards to both calendars which hopefully answer your questions and further your research.

Also in addition I caught a strong impression a few weeks ago to create and present this article in regards to the Israelites did however observed a calendar that was governed by the moon, as they calcuated all of YHWH's holy days upon the calendar that YHWH spoke of in Exodus 12:2. Here is the article that is only a few weeks old, however so far the evidence in this article has been completely irrefutable. The title of the Article is called: JERICHO: A Battle March on the Sabbath ???  Here is the PDF link: http://www.scripturalsabbath.com/uploads/Seven_Day_Jericho_March.pdf 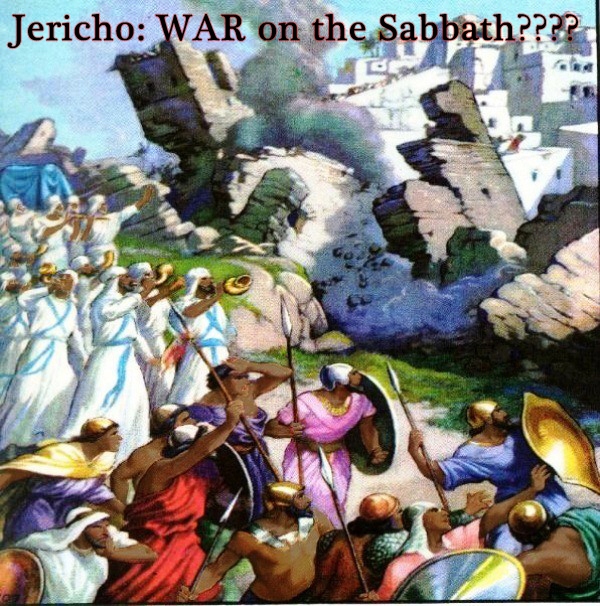 I'm glad I no longer have to live under the law or I would NEVER be found worthy of the grace and mercy of God.

Thank God for sending His Son to usher in grace and mercy so that by FAITH I may live by Him, in Him and for Him.

Just fyi - AKA Chrsitians are not of the House of Israel, so yes their not under the law, cuz the Most High never told anyone to be a Chrisitian or follow Chrisitianity which is a Satan inpired religion created by the Europeans and not by the Israelites.... Do you research Brother...Do not be one of the decieved and lost..

Here are some scrpitures for you that say the commandments (LAW) are required to keep.

12 For as many as have sinned without law will also perish without law, and as many as have sinned in the law will be judged by the law 13 (for not the hearers of the law are just in the sight of God, but the doers of the law will be justified; 14 for when Gentiles, who do not have the law, by nature do the things in the law, these, although not having the law, are a law to themselves, 15 who show the work of the law written in their hearts, their conscience also bearing witness, and between themselves their thoughts accusing or else excusing them)

3And hereby we do know that we know him, if we keep his commandments.


4He that saith, I know him, and keepeth not his commandments, is a liar, and the truth is not in him.

5But whoso keepeth his word, in him verily is the love of God perfected: hereby know we that we are in him.

Revelation 22:14-15  <----according to this scripture, if you do not keep the LAWS. (commandments) you will not be allowed to enter into G_D's Kingdom.

14. Blessed are they that do his commandments(LAWS), that they may have right to the tree of life, and may enter in through the gates into the city.


15.For without are dogs, and sorcerers, and whoremongers, and murderers, and idolaters, and whosoever loveth and maketh a lie.

I can continue on providing more scripture that even Yahshua (Christ) advised the House of Israel to keep the Laws, as it was a requirement in order to obtain salvation.

I see as as CULT LEADERS AND DECEIVERS you have cut and pasted scriptures to prove a mute point.

I also see how you have twisted scripture to prove a mute point.

However, the blood of Jesus has ripped that that old law to shreds and now we live under a new covenant.

I suggest you get saved forreal before YOU are lost!!!

It's very easy to call me a cult leader and a deceiver as being you need to evaulute the origins of Christianity as you might wake up and figure out on who is in a cult, as in Search the bible for what you (think) is according to scripture and if you can't find it, then your most likely in a cult.

Alsoo there was in no way I twisted scripture as being it's their in black & white. I added no twist or my rhetoric to the scripture.  If what I provided to you "according to scripture" bothers you, then you need to take up with the Most High, cuz I didnt write the scriptures in my previous post.

My response:
Do you have scripture to support this statement ? because I will tell you that your opinion to me is of no value without scripture along with your rhetorical explanation.  Your religion will tell you that you no longer need to keep the law, but that is not according to the House of Israel, cuz the law is the covenant (contract) unto the house of Israel, as being The Most High said the does he not change or change or alter anything that come out of lips in regarding his laws.

Psalm 89:34
My covenant (contract) will I not break, nor alter the thing that is gone out of my lips.

Do the research and you will discover that the convenant(contract) unto the House of Israel is the laws and no where in scripture was their a change on implying to CHOOSE to keep the law.

Also as you falsely accused me of twisting scripture, which gives me an implication that it would beneficial for you to study and stop listening to lies form your church or Pastor.  Here below are the very words from Yashua (Christ) on what he suggest to do in order to obtain salvation.

16 And, behold, one came and said unto him, Good Master, what good thing shall I do, that I may have eternal life?


17 And he said unto him, Why callest thou me good? there is none good but one, that is, God: but if thou wilt enter into life, keep the commandments.   <----- The commandments are the Laws