This group is for Black Preaching Network Members from California.

You need to be a member of California Members to add comments!

Comment by Prophetess Pinki Moore on January 12, 2009 at 4:30am
Praise the Lord, this morning I woke up from a dream about 0335, after having went to bed just at midnight and have to get ready to go to work in 20 minutes. But I was up last night spitting up, feeling as if I was about to die, and started praying, not for fear but for relief from the pain I was having in my insides. So in the dream, and I ask God to reveal the meaning of the dream and before I got out the bed He did. I was standing at home and had received a "call" that He was on His way, and as I made way outside to look for Him, He was already here. Revelations 1 says every eye will see Him when He comes. Well here in Houston, we have what we call the Ship Channel and I live far from that so He was at the Ship Channel when I heard His voice, but when I got outside anticipating His arrival He was in Sugar Land, the complete opposite side of Houston, )took me all of one minute to go outside and if you know Houston, you don't get out of your neighborhood in one minute, much less across the entire city.) Well people were there looking and waiting to go through this gate, and I seen some who I knew and had prayed for because of various reasons they were sick, they went through the gate but didn't return. And as I and some others, (supervisors, bosses, CEO's...big shots) were yet laughing, talking and manipulating the system, trying to figure out who they could profit off this "event" until they approached the gate. These Big Hats, I knew and at this point they turned to me as they were ahead of me in the "Line" and said, no one has come out and we don't know what's going on in there but put in a good "word" for us as they continued to laugh, joke and carry on. I approached the gate boldly and told them, I have no good "word" for you, you heard He was coming and you made no preparation, He told you He was coming, your mama, your grandmama, your granddaddy told you He was coming. To one I looked at him and said, your granddaddy was the Pastor, and you didn't listen to another I told her, yours was a Deacon and you didn't listen, I can't go in there now and stand before Him and give a good "word" for you. You should have prepared yourself, You knew He was coming, but He didn't come like you thought He would, or when you thought He would, but He told you He was coming. So I preceeded inside the gate and never returned back. But the word from the dream is to get ready and be ready. He is coming in an hour we think not. I found out this weekend a coworker died in his bathroom of an heartattack, he was 49. You are not promised a long life, but if you live for Jesus, it will be a good life, the Best life, and in the end, a rewarded life. You will not be able to go before the Judgement seat for your mama, daddy, sister, brother, son or daughter, everyone is going to have to make that appointment on their own, The fearful, the unbelieving, the coward will not stand before Him in judgment. People get ready, because on that Day, no one can put in a good "word" for you.

If you feel led, pass this to all your coworkers and unbelieving friends, you know the ones that go to church, but church isn't in them yet. Jesus is coming back. People are dying at what use to be 75 and 80, now they are dying between 35-50 of the same things. He's coming, will you be ready?
www.wo-menofpowerpurposeanointing.ning.com
Pinki

Comment by Bishop Robert Durgan on January 7, 2009 at 1:39pm
All About Christ World Outreach Church is looking for core leadership if you know of someone or you yourself would like to help let me know. We need Youth Pastor, Mens Ministry Pastor, Women Ministry Pastor, If you are ready to lead this could be your opportunity the new church plant will be in the Inland Empire Area in Rancho Cucamonga, CA we need Deacons all church positions are open...IF interested or if you know of someone call or e mail today Bishop Robert Durgan @ (909)246-7673 or robertrd_robert@yahoo.com or help start up then go back to your ministry once church is up and going. Execuitive Pastor, Assitant Pastor, Usher, Greeter, Deacons, Chior Members, Chior Director, Minister of Music, Prayer Warriors, All Church Positions open

National Intercessory Prophetic Prayer Call tonight at 10pm Eastern, 9pm Central, 8pm Mountain, 7pm Pacific. This call is for the bold and courageous, those that will go before the Throne of God in petition for others. Join us as we go beyond the veil into the face of God. All prayer warriors, intercessors, hurt, broke, busted, disgusted, wounded, people that have a need are invited to join us. The call in number is 269-320-8300 pin code 241623#

Comment by Andrea Taylor on January 2, 2009 at 1:12am
Happy New Year! Please come out and support the biggest HIP HOP PRAISE PARTY IN SO-CAL....TONIGHT Friday, 1/2/09 SEND YOUR YOUTH....all are welcome!

Hello Precious, I want to remind you to join the monthly Tele-Net Ministry Conference, we will be ministering on the issues we face. The conference is FREE the call in number is 269-320-8300 pin 241623#, we will start on the 1st Saturday of every month, beginning January 3, 2009 at 10am Central time, so mark your calendars! We are going to discuss the Issues we face in everyday life, as well as define, understand and walk in our purpose. Invite your friends to join in. Send me a message to let me know if you will be in attendance, the calls hold 96 people.
P.E.A.R.L.S.
Practical
Everyday
Applications
Relating to
Life's
Struggles

Expect a move of God in your life!
832-208-2110 for more information. Thank you to the precious few who have already committed to being on the conference call. Have your Bible, pen and pad ready. Have a open heart and mind as we expectantly await the glory of God's manifestation.
www.wo-menofpowerpurposeanointing.ning.com
www.awealthydiva.soulpurpose.net

Comment by Paulette Harper on December 27, 2008 at 12:17am
Greetings from Minister & Author
www.bvministry.org
That was then, this is now 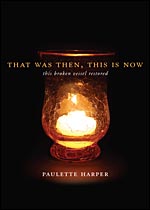 Comment by Bishop Andre E. Matthews on December 16, 2008 at 10:56am
We greet you all from FreshFire Fellowship Church!
Share with us how we can put flesh on our newly established God-inspired covenantal relationship!
Grace and Peace, The Matthews.

This is your personal invitation to join me For Saturday Night Alive In Him Bible Study with Prophetess Allison J. Cross as she teaches the Word of God in love and simplicity.

Comment by Apostle Alfred Henton on December 10, 2008 at 1:31pm
Thank God for your covenant in cyperspace. I am praying for covenant relationships in this new season. For we will not have to fear covenant, because covenants are made in heaven. I am open for scheduled meeting both indoor and outdoor camp meetings. You can contact me at (205) 821-2823.
Please visit me at http://www.myspace.com/apostle_alfred_henton.