PROPHETESS C. JOY REED has not received any gifts yet

If I were speaking. I would stand and say never has there been a time in the body of Christ that we have taken it upon ourselves to take the Christ out of Christianity. BUT I am reminded of a time when like the children of Israel then we do so now do and seek to have one thing or something greater than what we currently have all in the vein that we may be like someone else.

The Lord so warned us before Solomon took his wives that were of a nother nation that we ought not go a whoring after other Gods. He instructed the children of Israel beore in habiting the land of promise that the altars they say were not erected for his purpose, told the men not to marry the daughters of that land lessen they be led astray, hoodwinked, bamboozled and ran amuck upon.


But much like Israel then we are so now looking for and seeking always greater and never being satisfied with what we currently have ... plain and simple just ungreatful.


So I can say woman of God with uplifted hands and a still being purified heart that I myself have been guilty of asking for the things that would propel me to the next level without mastering fully the one made available.

U Best Watch Ya Mouth ! I have seen and heard enough about ministry and our commitment or the lack thereof to it to cause me to ponder the state of this dis-ease and its ability to run rampant in the body and I must say that I am at a lost for words (laughing to myself) for me that’s hard not to have anything to say.

I remember my mom and many people that I have encountered saying that loose lips sink ships. Where does our home training come in that reminds us that the first thing up should not be the first thing out? Where are our manners when our parents bid us that if we could not say something nice then we ought not to say anything at all?

There is an STD – Spiritually Transmitted Dis-Ease that has hit the body that is very similar to Gonorrhea which is similar in affliction to leprosy. However the difference is if gonorrhea is treated you won’t die but like leprosy it is highly contagious and can cause the loss of life and limb.

Often called the clap, gonorrhea is caused by the Neisseria gonorrhea bacteria. This bacteria can be found in moist areas of the body. An infected person may also spread gonorrhea from one part of their body to another by touch. "Infections due to Neisseria gonorrhoea, like those due to Chlamydia trachomatis, remain a major cause of pelvic inflammatory disease, tubal infertility, ectopic pregnancy, and chronic pelvic pain

About 50% of all infected women and 5-10% of the men with gonorrhea have no symptoms. If symptoms occur, they usually develop 2 days to 10 days after catching the infection.

Ministry is too serious for me to pretend, put on airs, and attempt to look deep or act as though I know what God will say when I am waiting just like everybody else. Where has arrogance crept in to the body where you feel your attitude can be nasty and you still be anointed … Not So! In our audacity where have we found or thought that we had a right to put ourself in a position to correct those we say we submit to. The thing being formed can not say to the one who is forming it to make me this way or that; as far as I thought I knew dead mean did not feel.

I must say that I perused this and the response that in it entails an encounter that I have had just this day; but then not really it has been long brewing for months now and all I could say is that I knew there was something there but just what it was I could not pinpoint or rightly say.

I could discern that there was something in the atmosphere that was quite different a smell that tinged on worship but was mingled with something else, for lack of a better word Strange Fire .

Again I pose the question where do we assume it is or place responsibility or right to tell those we submit to because we say the Lord said and then when it is convient all of a sudden and out of nowhere the Lord or perhaps you have changed your mind. The word of God says that He is not a man that He would lie; nor is He the son of man that He should repent. So when the script changes and the status quo no longer applies then who lied or changed their mind; certainly it was not the Lord, so again the title of this message blares like an alarm from a fog horn:


While on assignment in New Jersey ministering a message the Lord released a very potent word that was right off tha press. He had me to admonish the man of God and the saints that they had to completely eradicate the spirit of Abnom and Absalom from the house. When we further divide the word of the Lord we find that Abnom was in lust regarding his sister Tamar; so much so he conspired with his friend a plan to successfully orchestrate his plan and in so doing destroyed what should have been a place of covering and covenant relationship between he and his sister. It was internal; yet it was an ugly problem. His father forgave him and admonished him or so we can decipher because the word does not rightly say. We know that Absalom was upset to the point of wanting to kill him.

Now oddly enough he (Absalom) was upset to the point of contemplating and then carrying out a murder for an internal sin; his sin however was not so, for he laid with his fathers concubine on the roof top, not only making the sin public but also his desire to obtain that which his father had and like Esau the promise did not rest with him or his brother it lay with the offspring their father produced with Uriah’s wife.

Odd and interesting to say that least that; that which you fight to gain and pray to obtain is outside of your grasp and beyond your reach because it belongs to the one who did not seek it in the first place, not looking to procure any inheritance or blessing choosing to rest fully in the fact that they were simply a son. In fact he was too young to recognize or for any of that to matter; all he knew was that David was his daddy; had not even grasped or understood that he was a Kings Kid Interesting indeed!

We speak things as though they occurred suddenly when they were in us all along. Along with this word is one in the word that says it is not what goes into a man that defiles him; if I may make a play on words here, it’s what walks up out of them! (Got that one from my sista *wink wink*)

Where is the intimacy in the Holy Ghost sleeping around until you get something you can’t get rid of, something that prayer won’t cure, repentance can not contain and um sorry just won’t cut it. I believe the word likens it to a dog returning to its own vomit.

Here is a Sneak Peak at some of the topics we have lined up for you:

Volunteers - How to Get 'Em, How to Keep 'Em
Creative Classroom Discipline and Managment
When Wild Kids Show Up
Involving Kids In Worship
Predator – Proof Your Children’s Ministry....and much more

With speakers: Connie McKenzie of Christ for the Nations Institute, Cynthia Hunt of The Potter's House Church, Susan Rutledge of Hillcrest Church, Gail Miller of North Dallas Community Bible Fellowship Church, Carol Crockett, Pathway of Life Church and hosted by one of the nation's leading children's ministry evangelists and consultants, Ricardo Miller, you don't want to miss it!

Registration will include a Symposium T-Shirt, Information Packet and Lunch along with access to all sessions.

If you are part of a children's department looking for an event that will equip you to take new territory in reaching children for the Kingdom, this is the event for you! For more information or to register, call 214-275-7284, ext. 109 or visit us online at www.ricardomiller.com.

Ricardo Miller Ministries said…
There are some things I just don’t understand?Why do folks want to be in leadership and don’t want to lead? Why would you want to play and not win?
Why do some do great, others do good, and others just barely do?
To be successful it takes skill and ability, it also takes determination and hard work but most of all it takes want to! I believe if you want something bad enough you’ll do it. I have time for everything that I want to have time for.
The key is getting your want to where it needs to be and lined up with God’s plan for your life. There is a prize to win, how bad do you want it?

BEHOLD, GOD HAS PLACE BEFORE YOU LIFE AND DEATH, BLESSINGS AND CURSINGS, SO THEREFORE CHOOSE LIFE!.... 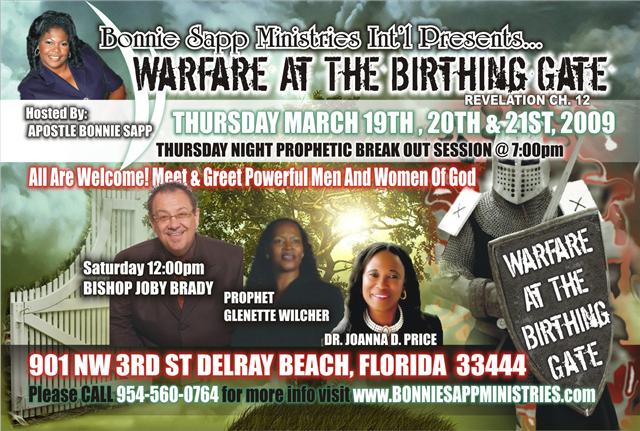 Bishop Dr. edward kings said…
HELLO BELOVED,LOOKING FORWARD TO FELLOWSHIPPING WITH YOU AND HAVING YOU COME BE A BLESSING TO MY CHURCH AND COMMUNITY AT LARGE.I LOVE YOUR MINISTRY.