Halloween IS NOT Christmas! 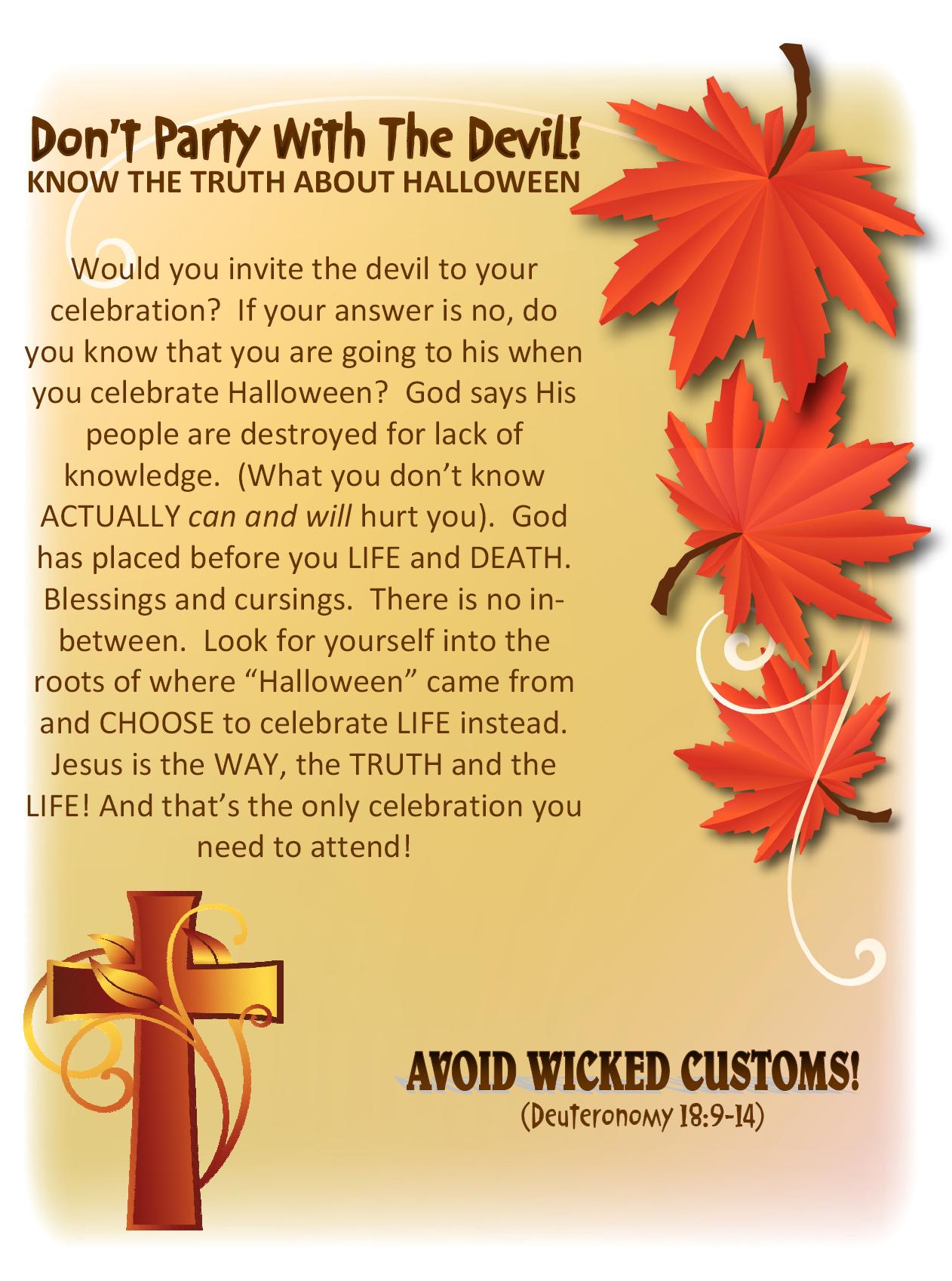 I believe I finally figured out what it is this year that is bothering me so much about Halloween. People are actually treating it like Christmas. And not only people, people who are confessing or professing I should say, to know Christ. To be Christians. Just so you will know, Halloween IS NOT Christmas! In my driving, I have seen neighborhoods where people have put up decorations for Halloween, as if it was Christmas. I mean lights, balloons and… Continue

DIAGNOSIS: Devil Is A Liar!

Praise the name of the Lord! For He is my Rock, He is my Fortress, He is my Deliverer. In Him will I Trust. What an awesome God we serve. True to His Word!

For most of the weekend I found myself in a hospital bed, on a heart monitor, taking a number of tests… EKG, ECG, Cat scan, Sonogram, blood work and more blood work… only for them to determine that the devil is a liar! Once again God is exalted and the devil is defeated in my life!

God is good! On Saturday after going… Continue

God You Said It, Remember?

As we go through some things, God wants us to remember some thing. And it is really very simple. He said, “Remember my Word. Remember the Word you heard Me speak.” That Word, God’s Word, what He has personally spoken to you, may very well be the only thing that will propel you forward.

I found myself recently at a standstill. We all struggle with things especially our faith sometimes and when my husband saw me struggling with mine, he said, simply, “You either believe God or you… Continue

I Ain't Buying That!

Shake It Off For Real

Many times we talk to people about God, unsaved people, other Christians, those who have developed or are developing a real relationship with Christ, and for whatever reason the Word goes over their heads. They really don’t want to hear you, they don’t want to change, or stop whatever it is that they are doing, and in some form or another, they are telling you to talk to the hand. Jesus said if you enter into a town and they don’t receive you, shake the dust off your… Continue

We are all probably familiar with the story of Moses, who God chose to lead His people, the children of Israel, out of the wilderness. And we probably know that God performed some miracles through Moses before the eyes of the people and Pharaoh, when God was bringing them out of the land of Egypt. Then we know how the Israelites journeyed in the wilderness for what should have been 11 days, but ended up being 40 years. God had to work some “stuff” out of them before they could enter into the… Continue

You Have A Friend Request!

Praise the Lord! Grace and peace all!

I belong to so many social networks and on these networks you are able to
set up your profile, which is really a “mini-bio”. And for the most part,
when you set up your profile, you put your best foot forward. You know, you
try to give people a glimpse of who you are in the limited space possible.
You have your name, whether or not you are married, single, or dating. You
have your birthday, your occupation, maybe where… Continue

A while back I gave a reflection on a GPS. And God reminded me of it recently, actually a few times, so I just felt led to share it with you all.

We had taken our daughter who is away at college, back to school, and driving on the way home from there, we had to rely on a GPS, which is a navigation system. It gave us detours and guided us home as it was designed to do.

A couple of days later, Minister Jeff and I were going out to eat at a new… Continue

You Must Don’t Know About Me

While I am a little hesitant about sharing this, the desire to please the Lord rather than man, is overwhelming. Because God’s love is overwhelming. How can I not consciously do what He told me to do? I keep hearing if you love Me, keep My commandments. That is everything and anything He tells you to do, regardless of how it might make you look (or sound). Sure it happens often enough that I fail to disobey the Lord, but God is merciful and He yet stands ready to… Continue

You know God is amazing to me. And I believe I have said it before, but I’ll say it again… it is so important to watch the things that we take into our spirit. Songs, words, sayings, pictures, movies, surroundings, and the list goes on and on because it can all get absorbed one way or the other. But on a website about a week or so ago, maybe even before then, someone posted as their profile status, they were counting their blessings. And I responded, “bless God!” It… Continue

Silent Sniper No More
Recently someone was facing some issues on one of the social networking sites of which I am a member. She stated that no sooner than making the confession to live debt-free, several things had begun happening. She was a little down about it and just wondered a little bit about God and how this could happen. And I commented back on the post and just reminded her that every time we as saints of God, make a confession to live according to His Word and His Will for our… Continue

Recently we were reviewing a Sunday School lesson where we spoke of Ezekiel when the angel of the Lord brought him to the waters. The Scripture is very familiar (Ezekiel 47:1-6) and says that the angel brought Ezekiel to the water, first pointing out his ankles, then knees, then waist and then to a point where it was too deep.

While we were speaking of the lesson (God says when we are yet speaking he hears us and answers us)… God gave us a vision of this. Imagine yourself for a… Continue

NO JUDAS, NO RESURRECTION!

Bless the name of Jesus for His Resurrection!

We know and we are thankful that Jesus is ALIVE!! HALLELUJAH! The grave could not hold Him. "O, death, where is your sting?" (You don't have one... praise the Lord!) Jesus got up on that cross and took upon Himself the sins of the world, so that we (you and me) could live. HE got up on that cross, because He said Himself, no man can take My life, unless I lay it down. And that's what He did. He died before they took His life. (He died on… Continue

Give Glory To God, Saints!

The Bible tells us in Luke 13:11-3, that there was a woman with an infirmity. That she could not stand upright. She could not stand up straight. For 18 years. But when Jesus saw her, the Bible says, He called her to Himself. I want to stop here for a second to say this, we want Jesus to see us. We want Him to see our infirmities, to see what ails us, troubles us, our diseases. We want Him to see that we need help. The Bible says that Jesus was teaching in the… Continue

On Sunday, I had the opportunity to give a reflection to the congregation. There were a couple of things on my heart to share, but one particular thing just stood out. As I was sharing I believed that I had spoken about what the Lord told me to go with, but as I sat down and begin to reflect on my reflection, I somehow thought that was not the Word for the day. But yesterday and today the Lord began to reveal some things to me. He gave me "revelation" on my… Continue

I was reminded of something that the Lord revealed to me a few years ago. The issue actually came up after I received an email about someone texting other Christians about the love of Jesus. For whatever reason, the person that sent the text had the other person's number to text him, but I guess only for certain things?! Anyway, so the person that sent the text began to receive all these emails stating how wrong he was for sending an unsolicited text, an unsolicited text about Jesus Christ,… Continue

Say A Prayer For Me, Jesus

I've shared recently how music is the voice of God and so many times a song just ministers to my heart when God wants me to get something. The song is called "Say A Prayer" and it is by Donald Lawrence. You know we go through things and somehow we manage just to sit back and let them happen to us, without asking for intercession or saying anything to anybody. Not really wanting to say anything because we want to be what my husband and minister likes to term, "Super… Continue

Praise the Lord, saints of God!
I posted back in January on a couple of other sites... but I feel led to share it here. I have already posted the video, which I believe sparked this testimony, so here it is. I pray God blessings upon you and that He will minister to your heart what you need to hear.

Music Is The Voice of God

Praise the name of Jesus!

Those who know me well (or even maybe a little bit if they're observant) know that I like to listen to music. Let me clarify that. GOSPEL and Christian music. Inspirational, contemporary, occasional rap (though very occasional), Christian, and even some Latino. For the young and the older. And I listen to music all day long, almost from the time I get up in the morning until the time I go to bed at night. Which is something that the Lord spoke unto the heart… Continue