Journey Part I-Husband of My Soul! 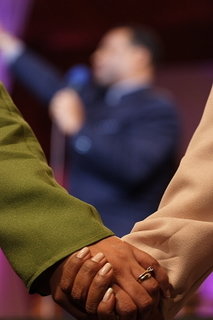 I went home for Thanksgiving and got restored. It was a time of Refreshing and for an outpour of God. God sent me home to sit and reflect and meditate. During this time, I got thirsty for Righteousness all over again. God has been having me on this journey about becoming a Partaker of the Altar (1st Cor. 10:13) and about being Broken (Matt. 26:26).

On this journey...God began speaking to me and said make me the husband of your soul. He said you can have salvation and not even be one with God. He said because salvation is a confession and a belief. Anybody can be saved but only "The Righteousness" can be one with him. That's why many are called (summoned) but few are chosen. (Matt. 22:14) People like to say we are all God's children...but that's not true because we are all God's creation but not all God's children. Because he spoke in his word in (John 10:5, 27) that my sheep know my voice and a strangers they won't follow. It also go on to say the enemy comes but he finds none of him in me. Alot of people have the form of Godliness (1st Tim: 3:15) but deny the power thereof. They know church, and routine. They know when to lift their hands, and shout AMEN!, and how to throw money on the Altar...but have no power to break the hand of the enemy. In tongues but no power, singing in the choir but no prayer life, preaching with no consecration, laying on of empty hands. Because the robe of Righteousness represents and is an extension of purification.

After I went through a process of purification and becoming a Partaker of the Altar, I went out and bought a wedding ring to symbolize my oneness and marriage to God making him the Husband and Bishop of my soul and every time I wear it as I go in prayer it reminds me of my oneness in the spirit with him. After I put in on my wedding finger something happened to me. I tried to put it on the other hand but it didn't feel right. God began to help me realize that this thing is for real. It was more than a ring. It is my identity. It identifies who I am by who I am married to, that's why I couldn't wear it on the wrong hand. It's like when a woman gets married her identity changes, she now has the last name of her husband. The problem with so many marriages(spiritual life) is that your trying to drag your old name (lifestyle) by adding a hyphen. Can you same your name...I'm holy-but I lie, I'm a preacher-but I fornicate, I go to church-but I steal. Some people are trying to live two lives. They got Righteousness on at church and the old nature when they leave the building. But when I became one with Christ my very nature and presence changed. I don't do the things I used to do, I don't go the places I used to go, I don't hang out with the same old folk because of my new identity.

This whole spiritual journey actually started months ago when I heard Prophetess Juanita Bynum teaching on Imputed Righteouness...going to God wrapped in the Righteousness of Christ and about Christ being in my belly. The scripture that stuck with was Revelations 19:8-10 that says She has been permitted to dress in fine (radiant) linen, dazzling and white--for the fine linen is (signifies, represents) the righteousness (the upright, just, and godly living, deeds, and conduct, and right standing with God) of the saints (God's holy people).

Then [the angel] said to me, Write this down: Blessed (happy,to be envied) are those who are summoned (invited, called) to the marriage supper of the Lamb. And he said to me [further], These are the true words (the genuine and exact declarations) of God.

Then I fell prostrate at his feet to worship (to pay divine honors) to him, but he [restrained me] and said, Refrain! [You must not do that!] I am [only] another servant with you and your brethren who have [accepted and hold] the testimony borne by Jesus. Worship God! For the substance (essence) of the truth revealed by Jesus is the spirit of all prophecy [the vital breath, the inspiration of all inspired preaching and interpretation of the divine will and purpose, including both mine and yours].

Until next time go with God and God will go with you!