IN COMMEMORATION TO THOSE WHO HAVE DEDICATED THEIR LIVES IN THE SERVICE OF GOD AND IN EXALTING HIS KINGDOM ON EARTH AS IT IS IN HEAVEN ….ANOINTED WORKS SD PAYS TRIBUTE TO THOSE WHO HAVE PROCLAIMED THEIR LOVE FOR GOD IN THEIR DIVINELY DESIGNED WAY.

As we celebrate black history month reflecting on the multitude of African Americans who have treaded the way through adversities even to the sacrifice of their lives, let us not forget those we encounter on a daily basis. Our sisters and brothers in Jesus Christ who work diligently in God‘s divine purpose. These women and men have dedicated their lives to enlighten and to empower all people by spreading the Holy Gospel. During this month of observance of Black History it is Anointed Works sd ‘s privilege to attempt to show recognition and honor to some of the many who “have paved and are paving” the way for future generations in the service of the Lord God with a Drum Major Instinct. While you may not be mentioned on this roll call on this occasion please be assured your service is a noble call and is fully appreciated. 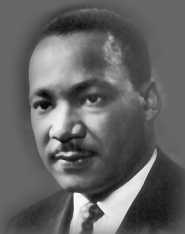 I know a man—and I just want to talk about him a minute, and maybe you will discover who I'm talking about as I go down the way (Yeah) because he was a great one. And he just went about serving. He was born in an obscure village, (Yes, sir) the child of a poor peasant woman. And then he grew up in still another obscure village, where he worked as a carpenter until he was thirty years old. (Amen) Then for three years, he just got on his feet, and he was an itinerant preacher. And he went about doing some things. He didn't have much. He never wrote a book. He never held an office. He never had a family. (Yes) He never owned a house. He never went to college. He never visited a big city. He never went two hundred miles from where he was born. He did none of the usual things that the world would associate with greatness. He had no credentials but himself.

He was only thirty-three when the tide of public opinion turned against him. They called him a rabble-rouser. They called him a troublemaker. They said he was an agitator. (Glory to God) He practiced civil disobedience; he broke injunctions. And so he was turned over to his enemies and went through the mockery of a trial. And the irony of it all is that his friends turned him over to them. (Amen) One of his closest friends denied him. Another of his friends turned him over to his enemies. And while he was dying, the people who killed him gambled for his clothing, the only possession that he had in the world. (Lord help him) When he was dead he was buried in a borrowed tomb, through the pity of a friend.

Nineteen centuries have come and gone and today he stands as the most influential figure that ever entered human history. All of the armies that ever marched, all the navies that ever sailed, all the parliaments that ever sat, and all the kings that ever reigned put together (Yes) have not affected the life of man on this earth (Amen) as much as that one solitary life. His name may be a familiar one. (Jesus) But today I can hear them talking about him. Every now and then somebody says, "He's King of Kings." (Yes) And again I can hear somebody saying, "He's Lord of Lords." Somewhere else I can hear somebody saying, "In Christ there is no East nor West." (Yes) And then they go on and talk about, "In Him there's no North and South, but one great Fellowship of Love throughout the whole wide world." He didn't have anything. (Amen) He just went around serving and doing good.

This morning, you can be on his right hand and his left hand if you serve. (Amen) It's the only way in.

I'd like somebody to mention that day that Martin Luther King, Jr., tried to give his life serving others. (Yes)

I'd like for somebody to say that day that Martin Luther King, Jr., tried to love somebody.

I want you to say that day that I tried to be right on the war question. (Amen)

I want you to be able to say that day that I did try to feed the hungry. (Yes)

And I want you to be able to say that day that I did try in my life to clothe those who were naked. (Yes)

I want you to say on that day that I did try in my life to visit those who were in prison. (Lord)

I want you to say that I tried to love and serve humanity. (Yes)

If I can help somebody as I pass along,

If I can cheer somebody with a word or song,

If I can show somebody he's traveling wrong,

Then my living will not be in vain.

If I can do my duty as a Christian ought,

If I can bring salvation to a world once wrought,

If I can spread the message as the master taught,

Then my living will not be in vain.

As always with love

Your sister in Christ Jesus ,

7 When I arrived there, I saw a great number of trees on each side of the river. 8 He said to me, "This water flows toward the eastern region and goes down into the Arabah, [a] where it enters the Sea. [b] When it empties into the Sea, [c] the water there becomes fresh. 9 Swarms of living creatures will live wherever the river flows. There will be large numbers of fish, because this water flows there and makes the salt water fresh; so where the river flows everything will live. 10 Fishermen will stand along the shore; from En Gedi to En Eglaim there will be places for spreading nets. The fish will be of many kinds—like the fish of the Great Sea. [d]