Shufrounia Castleberry said…
Hi Pastor Deniece Senter:
If you are in need of any assistants in Deliverance, Miracle/Healing or Evangelistic Ministry I am available.
I have added a few of God's Miracle/Healing Testimonies.
May God's Blazing Flame of Fire Anointing Rest upon You To Overflowing In The Glory of God. In Jesus Name. Amen!
KEEP RUNNING FOR JESUS HEBREW 12:1

MINISTER RAISED FROM THE DEAD
About five years ago during our watch night service our guest speaker came down out of the pulpit looking very pale. I said to her, you don't look like you feel well. She stated I don't feel well. I ran to the kitchen to get her some grape juice her tongue barely touched the juice. She layed her head on my shoulder and died. I was praying for her health and now we as a church was praying for God to raise her from the dead.
Her body became blue and then gray. It became so cold that I could no longer touch her skin any more. My hand would stick too her skin like ice. We had two nurses on staff that night, and they both took her pulse and said she's gone. We did not give up. We continued to pray for her. After three minutes without oxygen your brain is dead. After 45 minutes of praying God breathed into her lungs a fresh breath of life, and she stood up, and began praising God all over the church.
She gave a testimony and stated that she felt herself when she died. Now it is almost 1:00 A.M. in the morning. She had driven herself to church. We offered to drive her home. She said no I will drive myself. We insisted on driving her home. She still said no. She lived nearly an hour drive from the church. Although she would not let us drive her home we followed her all the way home.
January 2010 I saw this minister and she is doing well. PRAISE GOD FOR MIRACLES! HE'S A MIRACLE WORKING GOD. I GIVE GOD ALL THE GLORY!!! THANK YOU JESUS FOR BEING SO AWESOME!!!!!!!!!
Healing Hearts for Jesus
Anointed Minister Shufrounia Castleberry
www.freewebs.com/healingheartsforjesus/
anointedminister@bellsouth.net

Apostle/Prophet Dr.R.D. Harris said…
Praying much for ur broadcast.. that souls will be touched and won to Christ...

Katrina "c" said…
Hello,
MY sister in christ thank u for becoming my friend have a Bless Day...

Pastor Darryl Miller said…
Finally a way that Churches, Non-profits, and other organizations can raise the needed dollars to operate. What if you can earn money by searching the internet? No obligation to buy anything or sell anything. How about earning .05 cent every time you and group click on a web site. If you had 50 members the made 5 click or searches a day in 30 days you made $ 375 dollars that month and if those member had 2 family member or friends help them you mad $1,125.
Here the key It cost your Church, non-profit or any organization NOTHING to do it.
FREE OF CHARGE
But it a limited time call 828-238-5268 or click here http://thezone.powweb.com/geogre/benefitbarbusiness.pdf

“Knowing that whatsoever good thing any man doeth,
the same shall he receive of the Lord, whether he be bond or free.”
Ephesians 6:8 (KJV)

GOD BLESS YOU EXCEEDINGLY MY SISTER IN THE FAITH! Have a MERRY CHRISTmas season with a divine intervention of His Goodness! Love and prayers, V-

Bro. Steve Harris said…
Hello there ok where should we send info for the conference for you

Deniece Senter said…
With the strength of the Lord, we were able to get 3 shows done. To God be the Glory..please pray for us!!!!!

Deniece Senter said…
Thank you so much for your encouragement!!! I plan to stay humble and never forget where God brought me. Our humble beginnings as risen us from glory to glory. Be blessed woman of God.

Books for Boys said…
Great cause, Deniece! Stay humble and meek and may God continue to inspire, energize, and assist women who are suffering!!! Joy and encouragement, Marie

"It’s Crunch Time!”, This is a new children’s book by Marie Brewer. Find it on www.amazon.com (www.helenbrewer.com for excerpts and a link to book) This is my book of muscle for boys (ages 9-12) to point them in the direction of HOPE!...This is an interactive book where they can write about their feelings. It discusses acceptable behavior, honesty, good self-image, respect for females and animals, appreciation for teachers/school, choosing good friends. The book also talks about resisting gangs, guns, drugs, violence, alcohol and bad influences. Let's attack the behavior, not the boy. "It's Crunch Time!" , $10.95 , by Marie Brewer, www.amazon.com Be a part of the village to help our boys envision their true God-given purpose!
We can turn this thing around! SEE! THINK ! ACT!
IF NOT YOU , THEN WHO ?!
Heaven gives us hope! Marie Brewer 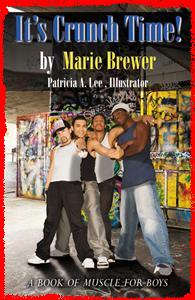