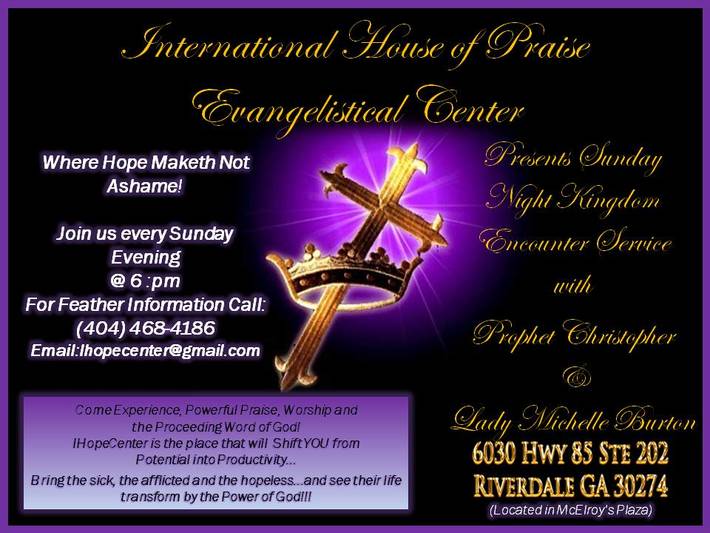 About Me: (Ministry Info, Hobbies, Fav. Music etc.)
Prophet Christopher Burton is a native of Brooklyn, New York. He was born to national evangelists, Evangelist Cynthia White and Dr. Charles Burton, Sr. He is the second of three siblings. As a child, the hand of the Lord was upon his life. At the age of 3 years old he started playing the drums. At the age of 9, he desired to play the organ. His pastor at the time, the late Apostle Jimmy Wren, Sr., Pastor of Heaven on Earth Church of God In Christ, in Brooklyn, New York, anointed his hands and released the gift that was hidden within him. Since that time, Prophet has traveled and played for many gospel artists.

At the age of 13, Prophet was playing for a shut-in and the Holy Ghost got a hold of him and revealed his purpose for living. He was then called into the prophetic ministry. Prophet Cliff Daniels, of the First Church of God In Christ, licensed him as a minister in 1998. One day the Holy Ghost said to him, “You don’t just possess the sound of Kingdom in your hands, but you also possess the sound of Kingdom in your mouth”!

In 2002, he was consecrated into the office of Prophet by Apostle Steven Wilhite of Christ Cathedral A New Apostolic Ministry International in Atlanta, Georgia.

Prophet travels all across this nation preaching and teaching the hidden mysteries of God's word. He is truly an end time prophet who sees and hears from God. He operates in signs, wonders, and miracles. He believes that there is nothing too hard for God, and if God promised it, He's got to perform it!

He lives by the scripture Isaiah 40:5, And the glory of the LORD shall be revealed, and all flesh shall see it together: for the mouth of the LORD hath spoken it. He is an intercessor for the body of Christ. He is a mouthpiece of God, called and anointed and appointed for such a time as this!

Prophet Burton has been mentored by some of the most seasoned prophets of our time; Dr. Brian J. Mosley, Prophet Cliff Daniels, Apostle Jimmy Wren, Sr., and the late Prophet Nathan L. Simmons, just to name a few.

Currently, he is the founder of Kingdom Only Alliance Network of Churches, where the purpose is to build Christ, the hope of Glory, into the lives of people though sound teaching, preaching and demonstration. He is also in college working towards a degree in Christian Education and Psychology. He is a song writer, producer and vocal arranger. He resides in the city of Atlanta, Georgia. .

Grace and Peace,
This is Prophet Christopher Burton Pastor of the International House Of Praise Evangelistical Center, and I'm so excited about this coming week. I will be sharing with Apostle Thomas Henry in his Holy Convocation in Albany Georgia this coming Friday. We are expecting Man and Woman of God from all across the country to be apart of this awesome experience. If you are in Albany or the surrounding areas please feel free to come and share with us. I will be preaching on Friday… Continue

Grace and Peace,
This is Prophet Christopher Burton Overseer of The International House Of Praise Evangelistical Center. As I was mandating today the Holy Ghost said something to me that really made me think. He said"When was the last time anything I created had a choice to change their purpose for existing?
Have you ever seen the Sun stop shining because it wanted to be the moon?
Or Have you ever seen a dog stop barking because it wanted to be a cat.
I say that to say, If… Continue

Grace and Peace,
This is the Administrative office of the International House of Praise, We would like to invite all of our Yahoo family to our Kingdom Encounter Service this Sunday night. God has bless us to change locations so this will be our last service at this location. We will be letting you all know where we are moving too this Sunday night. We have Apostle A. L. Watson, Pastor of the New Faith Mission Church International coming to share with us. He is a Powerful Man of God. You… Continue

Grace and Peace,  You left me a message a little ways back.  I don't visit this site often, however I wanted to respond even though it is a late response.  I pray God's choice blessings will continue to overtake you in every area of your life and ministry.

Given through Brian Charles

“You must leave it all behind, city of My wrath!”

“Leave this place, city of My wrath!”

“Destroyed in an instant, city of My wrath!  You must go!”

“Leave the city of My wrath!”

“It’ll be destroyed in an instant!”  “It’ll be blasted out of existence.”  --New York City

“Destroyed in an instant by My wrath.”  --New York City

“It’ll all be blasted apart in a minute.”  --New York City, world economy

“Leave it all behind.”

“You must go!  You must flee for your life!”

“Flee the city of My wrath!”

“Eternal destruction shall be her lot.  She has refused to obey Me.  Thus says the Lord of Hosts.”

“All the big cities will be nuked.”

“It’ll all be gone in an instant.  You’ll see –by nuclear fire.”

“It’ll all erupt in nuclear fire!”

“Great is My wrath against this place!”  --New York City

“Get out of My country –I shall bring destruction upon it.”

“It’ll be blasted off the face of the Earth!”  “I’M gonna destroy that town!”  --New York City

"I'll destroy this city with a sudden burst.  It will all be reduced to piles of rubble."  --New York City

“See them building those buildings taller?  I shall bring them flat!”

“Towers will come down in an instant.”  -Manhattan

"I’ll tear it down with My bare hands."  --Word of judgment for the Empire State Building

“This place will be collapsed.”  --Lincoln Tunnel

“This place will be collapsed under My hand.”  --Port Authority Bus Terminal, New York City

“Not a block will be left on top of another that won’t be blasted away.”

“It’ll be a thing of the past.”  --The Statue of Liberty, and what it stands for – freedom and liberty

“The American flag will be a thing of the past, replaced by martial law, New World Order control.”

“It all must go –they won’t serve Me.”  --God’s people, the Christians and the Jews

“It all must go –they won’t obey Me.  Thus says the Lord Most High.  Amen”

“Leave it all behind –it’s coming under My wrath.  They have refused to obey My will.”

“They won’t obey Me.  Nobody will.  I must destroy them for that.”

“All apportioned to destruction.”

“All this will be a thing of the past.”  --nightlife, culture

“All this will be submerged underwater.”  --NYC, CT

“It’ll all be submerged under the sea.”  --NJ, New York State, Long Island

“I’m gonna destroy this place.  They depend on money too much.”

“They have chased after their idols.”  --People of NY, NJ

“It’ll all be submerged under the sea.”

“Factories will be silent under My wrath.”

“I’ll destroy the world because of that!”  --covetousness, greed

“I’m gonna destroy humanity.”  --because of the sin of covetousness

Prophet Ebenezer Arthur said…
GOD BLESS  YOU PROPHET FOR INVITING ME TO YOUR WALL CAN WE CHAT MORE SERIOUS ON MINISTERIAL PROGRESS? PLEASE LET ME KNOW. STAY BLESS AND SHALOM

prophtess LILIAN NNEKA ENESON said…
THANKS FOR THE ADD ,IT IS A PLEASURE MANY BLESSINGS .YOU ARE ASSGINMENT BECAUSE YOU CARRY PROPHETIC DESTINY .PLEASE ADD ME ON THE FACE BOOK

We Re grateful for the opportunity to commune with you at this time it has been well over one year, but I was awaiting the release. I look forward to working in Atlanta for Kingdom's sake

Prophetess / Lady Kim Reames said…
Would like to Invite you to an Apostlic movement 2 night Revival in the city of Newark. AT World Shakers Church International Bishop Andre/ Prophetess Kim Reames 505 Central Ave, Newark NJ.. enter on 8th street with Apostle David Harrison from ATL GA. OH MY Powerful man of God with God Aoniting and Power.. Pray to see you there..
Dec 9 & 10@7:30