"Today I say to you that the challenges we face are real. They are serious and they are many. They will not be met easily or in a short span of time," Obama told those gathered on the National Mall -- a crowd estimated at about 2 million -- and millions more watching on television and the Internet.

Obama acknowledged the "nagging fear" of an imminent decline of the U.S. He firmly asserted that Americans were up to reversing the trends spawning that fear, whether they be social, economic or political.

"Greatness is never a given. It must be earned," he said, further proclaiming that people who question the scale of U.S. ambitions "have forgotten what this country has already done."

His administration will "begin to responsibly leave Iraq to its people and forge a hard-earned peace in Afghanistan," Obama said, adding that he intends to engage the Muslim world in a "new way forward, based on mutual interest and mutual respect." Video Watch two-pronged message »

"America must play its role in ushering in a new era of peace," he said.


He also vowed to end the divisiveness and partisanship he said was rampant through Washington.

"We come to proclaim an end to the petty grievances and false promises, the recriminations and worn-out dogmas that for far too long have strangled our politics," he said. Video Watch Obama say Americans chose hope »

In another allusion to Washington's shortcomings, Obama promised to hold accountable anyone handling taxpayer dollars.

"And those of us who manage the public's dollars will be held to account -- to spend wisely, reform bad habits, and do our business in the light of day -- because only then can we restore the vital trust between a people and their government."

The new president also lauded the civil rights movement that ultimately made his election possible. Because of that movement, he said, "a man whose father, less than 60 years ago, might not have been served at a local restaurant can now stand before you to take a most sacred oath." Video Watch Sen. Dianne Feinstein open the swearing-in ceremony »

Obama also said he would incorporate "old friends and former foes" in the battle to curb global warming and stave off the nuclear threat.


To terrorists, he spoke directly: "For those who seek to advance their aims by inducing terror and slaughtering innocents, we say to you now that our spirit is stronger and cannot be broken; you cannot outlast us, and we will defeat you," the president stated.

After the speech, spectator L.J. Caldwell said the moment represented the pinnacle thus far in the civil rights movement.

"When you think back, Malcolm [X] fought. Then we come a little further, Rosa Parks sat. Then come up a little further and [the Rev. Martin Luther King Jr.] spoke. Then today, President Obama ran and we won," said Caldwell, of Somerset, New Jersey.

Wearing a navy suit and red tie, Obama was sworn in using the same Bible that was used in President Abraham Lincoln's inauguration.

The jubilant crowd became quiet as Obama began his address, with only an occasional "That's right" or "Amen" and scattered applause from the hundreds of thousands in front of him.

Following the inauguration ceremony, Obama walked into the Capitol and signed his Cabinet nominations -- which the Senate will vote on when it convenes at 3 p.m. -- and signed a proclamation of national renewal and reconciliation.

"I was told not to swipe the pen," Obama quipped after signing the document, similar to proclamations signed by the last three presidents.

Hundreds of thousands of people gathered on the National Mall -- dancing, singing and vigorously shaking flags -- before Tuesday's swearing-in.

"This is America happening," said Evadey Minott of Brooklyn, New York. "It was prophesized by King that we would have a day when everyone would come together. This is that day. I am excited. I am joyful. It brings tears to my eyes."

Minott was at Lafayette Square near the White House, where Obama and his wife, Michelle, had coffee with President Bush and first lady Laura Bush before heading to Capitol Hill.

The Obamas attended a prayer service earlier at St. John's Episcopal Church to kick off the day of events surrounding Obama's inauguration.

As many as 2 million people were expected to crowd into the area between the Capitol, the White House and the Lincoln Memorial.

Gerrard Coles of Norwalk, Connecticut, had staked out a position in front of St. John's.

"I think this was a beautiful thing," he said. "It's not every day that you get to be a part of history."

Nine-year-old Laura Bruggerman also hoped to catch a glimpse of the soon-to-be president. She waited with her mother, Wendy, and father, Jeff, of Bethesda, Maryland, amid an affable crowd that tried to let shorter onlookers and children to the front for better views.

"I want to see Obama. I think that would be really cool. I could tell all of my friends that I got to see him," the youngster said.

Some spectators were more than a mile from the swearing-in ceremony, watching on giant TV screens erected along the National Mall. The ceremony also drew celebrities like actors Dustin Hoffman, Denzel Washington and Steven Spielberg.

"It's behind the dream. We're just here feeling it with the throngs of people. It's amazing grace personified," Oprah Winfrey said.

After taking a motorcade to the White House, Obama and his family will watch the inauguration parade from a reviewing stand. The parade begins at 3:45 p.m. ET.

The new president and first lady will close the night by attending 10 official inaugural balls.

In addition to Secret Service, the security effort will involve 8,000 police officers from the District of Columbia and other jurisdictions, 10,000 National Guard troops, about 1,000 FBI personnel, and hundreds of others from the Department of Homeland Security, the National Park Service and U.S. Capitol Police.

This article found at CNN.com

Comment by Sally Williams on January 21, 2009 at 9:12pm
I was there and it was a honor to be in the midst of it all. As I took tours of the city and reminded of the history from which we as black folks came, I am truly determined and motivated within myself to do what God has called me to do. We can win if we make an effort and keep our eyes on our true King Jesus Christ, my Lord and Savior. Barack I'm proud of YOU!

Comment by Minister Robbin Swinger Otey on January 21, 2009 at 3:12pm
New Babylon has crowned Her new CEO & King! All HELL the King!
NOT!

Comment by barbara a pope on January 20, 2009 at 7:15pm
FATHER GOD I PRAY FOR ALL FAMILEYS AND THERE LOVED ONES, THAT YOU WOULD BLESS US ALL THIS DAY OF THANKSGIVING FOR OUR NEW PRESIDENT BARACK OBAMA,HIS WIFE OUR FIRST LADY AND HIS BEAUTIFUL CHILDREN THAT HAVE WALKED INTO THIS NEW SEASON TO COME THAT YOU WOULD OPEN UP THE WINDOWS OF HEAVEN AND POUR OUT BLESSING THAT WE WONT HAVE ROOM FOR AND THAT YOUR HOLY SPIRIT WOULD DWELL AMOUNG US AND IN US AS WE GIVE YOU THANKS NOT JUST FOR THE DAY WE CELEBRATE BUT FOR THE WHOLE YEAR , IN GOOD TIMES WE GIVE YOU PRAISE IN BAD TIMES WE GIVE YOU PRAISE WHEN WE ARE IN THE MIST OF A STORM WE GIVE YOU PRAISE FATHER GOD YOU DESIRVE ALL THE GLORY AND WE HONOUR YOUR NAME AND YOUR BLESSED SON JESUS CHRIST FOR GIVING HIS LFE SO THAT WE MIGHT HAVE A RIGHT TO THE KINDGOM OF HEAVEN FATHER GOD I THANK YOU IN ADVANCE FOR WHAT YOU HAVE BLESS US TO ENDURE I PRAY THAT OUR NEW PRESIDENT WILL HONOUR YOUR WORD AND WILL SEEK YOU FOR ALL GUIDENCE AND SEEK YOU BEFORE ANYTHING IS DONE SO THAT YOUR WILL,WILL BE DONE FATHER GOD I THANK YOU BECAUSE YOU ORDAINED THIS SEASON AND WE GIVE YOU ALL THE GLORY HONOUR AND PRAISE WE KNOW THERE IS NO WEAPON THAT WILL FORM AGAINST THIS FIRST FAMILY THAT WILL PROSPER THEY WILL BE PROCTED BY YOUR ANGELS THAT HAS SOROUNDED THEM FROM THE BEGINNING AND WILL KEEP THEM IN PERFECT PEACE ALWAYS FATHER PLEASE BLESS ALL MY FRIENDS WHOM I LOVE DEARLY AND HONOUR THRIE FRIENDSHIP AND LOVE I THANK YOU FATHER GOD FOR THE FREEWILL THAT YOU GIVE US TO MAKE THE RIGHT DECISION AND KNOW FATHER GOD WHAT EVER WE DECIDE THAT YOU ARE THERE FOR US AS LONG AS WE SERVE YOU AND MAKE YOU FIRST IN OUR LIVES I THANK YOU FOR YOU LOVE MAKE THIS A DAY OF PEACE LOVE JOY STRENGENTH AND THAT THE ANGELS WOULD ENCAME ALL AROUND US IN THE NAME OF JESUS I DECLARE IT AND DECREE IT BE IT DONE IN YOUR NAME FOREVER AND ALWAYS

Comment by Praying For Obama on January 20, 2009 at 6:58pm
Share A Prayer for Our President and have it published on www.prayingforobama.com 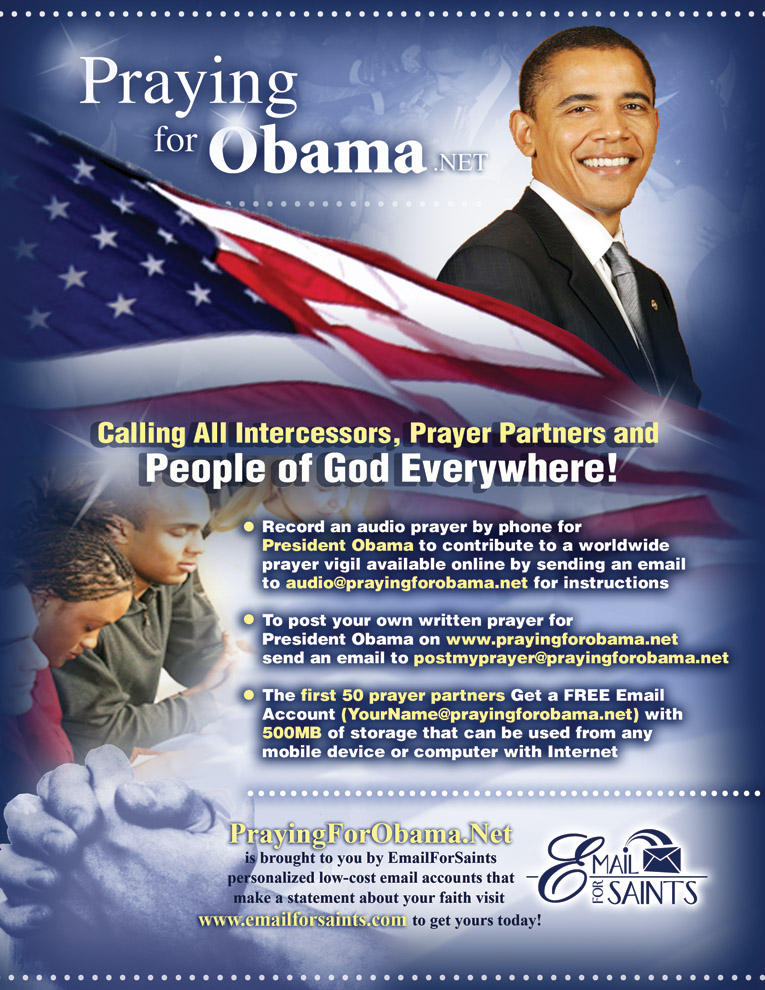 Comment by Eric Hancock on January 20, 2009 at 4:04pm
I live in Dc and was there and Brother you missed it if you was'nt there,,,BEAUTIFULL