The position of Women

God's Anointed Sanctified has not received any gifts yet Senior Pastor Vaughn Brazle Sr. is known to many as a man of God.  In April 2008 Pastor Brazle and his wife Pastor Theresa Brazle founded the church "God's Anointed Sanctified Church" with only 5 members.
Early in his assignment as a Shepard in the kingdom of God, he was inspired by the
holy spirit , if you build the people of God, they will build the kingdom.
Pastor Brazle  is now in his 2nd year of pastoring and his membership has
grown to well over 50 +  members.  After seeking God, he was led to
partner with other ministries to build the kingdom.

In his 2 years of pastoring, his ministry has reached the souls and spirits of the people. Because he is a man of God that believes all things must be done decent
and in order, he sought God for instructions.  In year 2010 he was led to
change the name of the church from "God's Anointed Sanctified Church" to "God's Anointed Sanctified Worship Center" , a place where "We Change The Way You Do
Church".

Pastor Brazle is a visionary with a entrepreneurial spirit, he has led God's Anointed sanctified Worship Center into facilitating outreach ministries that encompass many facets of spiritual development in a kingdom matter. He headed up the Men's Ministry " Am I My
Brother's Keeper" and a center of  many in-house ministries were created
such as: Children's Church during our worship services, a Daycare Center during
the week, the H.O.P.E Food Program (Helping Other People Eat) and H.O.P.S.
program  (Helping Other People Survive).

Pastor Brazle was called in 1980 and  licensed in 1981,after serving as a faithful member and walking into his gift, he was Ordained as Pastor in year 2007.  He and Pastor Theresa were members at Abundant Life Christian Center Church in Richardson , Texas where Apostle Henry
and Prophetess Arlena Crane are Pastors.  Pastor Brazle is a great man of
faith and obedience, while under the leadership of Apostle Henry and Prophetess
Arlena Crane, God spoke to him that it was "time for him to go to work" and
build the kingdom of God.

Pastor Brazle is a native of Houston, Texas and has lived in the Dallas area for over 20 years. He met his loving, sharing and caring  wife Pastor Theresa Brazle in 2004 who has been a resident of Dallas, Texas all her life. Together they sought  God for direction to bring the vision of
the kingdom into existence.  God brought these two together in matrimony in
June 2007. God has blessed them to parent 7 children; 3 son's and 4 daughters.

God has called us to do a great work in ministry to touch the lives of people to
make a positive and lasting impact to the Kingdom of God .
Pastor Brazle is anointed by God and has been taught by a great Father in the
ministry; Pastor David Botts Sr. of Houston, Texas. He attended God's Holy
Tabernacle Missionary Baptist Church  for 10 years, he taught Sunday School
and served as a Armor bearer  for Pastor Botts.

Pastor Brazle is not ashamed of the gospel of Christ and preaches it with fervor. It is his desire to be a blessing to the Body of Christ through the preaching of gospel. God has given me the gift to preach the Gospel, restore the wounded and broken
hearted.

Still, unto whom much is given, much is required, and we are diligently pursuing
our mission of taking a positive Gospel of life and hope to a restless and
hurting world. We pray that what you find here will encourage you in your own
vision. God is no respecter of persons. What he’s done for us, he’ll do for you!
We have found Him to be faithful and can truly say that what He starts…He
finishes. 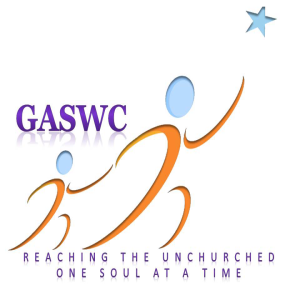 Happy art thou, O Israel; who is like unto thee, O people saved by the Lord!"

DR. ROY K. FARLEY JR. said…
I desire us to become friends I am in Dallas !

Bishop G.Anthony Howell said…
Check out the new free online Ebook at http://prayerschool.webs.com
and help your family and friends to be in Good health through the healing of sicknesses, diseases and help disorders.

Please help us to get the word out by going to the invite section on your page this site and inviting others, its easy just put in your email site information the computer does the rest. Thank You for your love

The Apostle said…
My Brother, if you are available on aug 28th at 5pm, we would love to have you sit on our famous Men Summit Panel, at, The Essence of a Woman Summit in Dallas.
Let me know if youare available?

QUEEN APOSTLE JANET COOK said…
GOD BLESS YOU! PASTOR & COPASTOR BRAZLE MISS YOU. STAY ON THE WALL AND DON'T YOU COME DOWN.

Evelyn Jones Reed said…
Hello,
My name is Evelyn Jones Reed and I am a local Gospel Playwright. I would love to invite you to my latest Gospel Stage Play, "When Hell Is A Place Called Home". Based upon The Preacher and The Prostitute. Pastor Hosea is the newly appointed pastor assigned to resurrect a church filled with gossip and backbiting “A Dead Church”. Amid the test and trials to restore his adulterous wife “Gomar”. The story line is well written and will challenge all of your emotions.

Tickets are very affordable and can be purchased through any Ticketmaster Outlet or directly thru the TBAAL Box Office. For more information about the production plz visit. www.evelynjonesreed.com Please keep this awesome Cast and myself in prayer that God will be glorified through this production and someone will be save.

May the peace of God abide with you and your household.
Gospel Playwright, Evelyn Jones Reed

Pastor M.Truss-Barber said…
Hello Pastors Brazle,
May your continue to flow by the leading of the Holy Spirit.
His Servant,
pmtb

Dr. Charles Easter said…
Although we try to get a word daily sometimes we run out of time to search the scriptures and sometimes we want to hear a word from a preacher and we can't.You can now go to www.preachingallday.com and hear messages of inspiration from men of God.We want to enrich your spiritual experience daily through preachingallday.com
Also go by and visit this site also it part of my preachingallday family.

Abraham Israel said…
SHLAOM! MY DEAR BROTHER & SISTER! YHWH IS THE FATHER NAME! AND YHWH IS THE SON NAME! IT IS THE SAME! READ: JOHN 5:43, LOOK UP: YHWH AND TELL ME WHAT YOU FIND, MOREOVER IT'S A POWERFUL BLESSING TO STUDY AND TO KNOW; ALSO TO TALK ABOUT! REMEMBER: THE TRUTH WILL MAKE YOU FREE! NOTE:SOMEONE IS DOING ROMANS 1:25, I AM NOT PLAYING IT IS PEOPLE WITH OUT REAL UNDERSTANDING DOING ROMANS 1:25, AND WILL NOT DO; 2 TIMOTHY 2:15, PRAISE YAHWEH! SHALOM

Pastor Jesse G. Gibson said…
Pastors Vaughn & Theresa Brazle,
Pray with me brother and sister in Christ as I prepare for 2010 mission work. We are looking churches that will partner with us. We also go to other states within the us to host prayer conference.
Pray with us, for open doors
God bless
Pastor Jesse

Apostle Anthony Yarde said…
God’s Word is where the glory is. The more you speak God’s Word, the more you’ll experience the glory of God in your life. Remember what the Bible says: “If the clouds be full of rain, they empty themselves upon the earth…” (Ecclesiastes 11:3); this is what happens when you continually speak God’s Word. The atmosphere around you becomes so saturated with the anointing, causing the glory of God to be revealed in you.AMEN

From the Author of The Naked Truth: The Gospel According to Singles
www.emarceljones.com 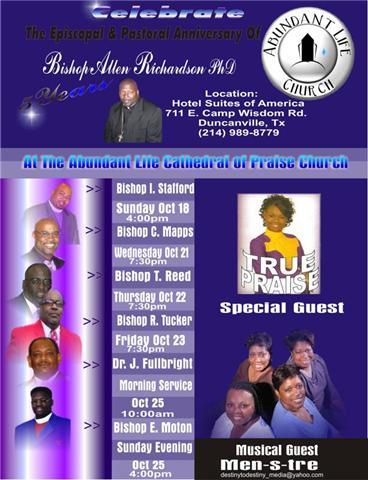 Apostle G. S. Jackson said…
Grace and Peace Great Man and Woman Of God, Thank you so much for the extension of the olive branch. May the Blessings of the Lord continue to overtake you through your obedience and as you hearken unto the voice of the Lord our God! Continue to bask, live, walk, uphold, execute and enforce HIS TRUTH!

Pastor Brenda Ellison said…
HALLELUYAH ! Thank you for allowing me to be your friend in ministry..